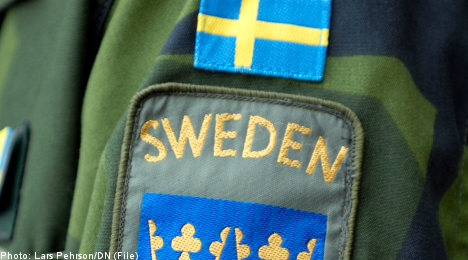 In 2009, the Saudi delegation was given a tour of a Swedish Armed Forces (Försvarmakten) top secret command centre in Bålsta, north of Stockholm, the Expressen newspaper reported.

While Sweden’s military brass had at first said no to the proposed visit, the Saudi officials were ultimately allowed to see the facility, from which Swedish troop movements would be controlled should the country find itself at war and to which access is extremely limited.

“Neither you nor I could get in there under any circumstances, but they were allowed in. It’s unbelievable,” a source from the Swedish Armed Forces told Expressen

A letter from the Swedish ambassador to Saudi Arabia at the time, Jan Thesleff, to the Saudi Royal Court, published on Wednesday in Expressen, states that “several underground facilities with different functions” were visited by the Saudi delegation.

The Swedish Armed Forces confirmed for the TT news agency that the top secret command centre in Bålsta was among the sites visited by the Saudis.

“Yes, that’s right. The background is that the Swedish Fortifications Agency (Fortifikationsverket) made a request with the Swedish Armed Forces to carry out a visit to a facility in Bålsta,” military spokesperson Erik Lagersten told TT.

“But after an additional proposal from the Fortifications Agency, we reported this to the Government Offices according to existing rules,” Latersten said.

“When foreigners visit what is referred to in military parlance as war command centres, the Government Offices must approve them. And they did [in this case].”

The visiting Saudi officials weren’t allowed to visit any of the protected areas at the facility, however.

“We limited it to the earthen parts; to how you protect a facility,” said Lagersten.

News of the Saudis’ visit comes amid new reports detailing the nature of a weapons plant that the Swedish military reportedly planned to help build in Saudi Arabia.

According to Swedish technology magazine Ny Teknik, the planned factory was to be used to upgrade anti-tank missiles which the Saudi military previously had at its disposal.

Citing anonymous sources, the magazine reported that the missiles to be upgraded at the plant were part of Franco-German long-range anti-tank missile system known as HOT.

The HOT missiles must undergo regular maintenance in order to remain dependable in combat situations.

In a memo from Jan-Erik Lövgren, deputy head of the Swedish Agency for Non-Proliferation and Export Controls (Inspektionen för strategiska produkter – ISP) to parliamentary committee which oversees Sweden’s arms export controls, the project in Saudi Arabia was meant to “build up their domestic competence for maintaining as well as modifying anti-tank missile systems”.