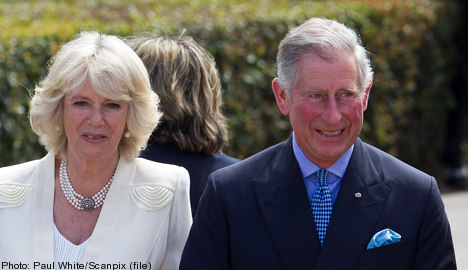 The trip is in conjunction with British Queen Elizabeth II’s Diamond Jubilee, and the stay in Sweden includes a number of visits and activities around Stockholm.

“The programme for the royal couple’s visit very much reflects Prince Charles’s own interests in sustainability, climate and integration,” said British ambassador Paul Johnston at a Tuesday press briefing ahead of the visit.

The royal visitors will be staying as guests of the Swedish Royal Family at the Royal Palace in central Stockholm.

Shortly after touching down, the royal couple will be greeted by Prince Carl-Philip and taken to the nearby hangar to view a Swedish fighter jet Gripen and listen to a briefing on the Swedish contribution to the recent NATO operation in Libya.

In the afternoon, Charles and Camilla will visit the Fryshuset youth centre in Stockholm together with Queen Silvia and Prime Minister Fredrik Reinfeldt.

There they will get to meet young people and see the efforts put in place to help young Swedes with troubled pasts and social problems, something very close to Prince Charles’s heart since he set up the Prince’s Trust in the UK 35 years ago.

On Friday, the Duchess and the Swedish Queen will visit a British-Swedish pre-school while the King and Prince Charles visit the Stockholm Resilience Centre, where they will discuss climate change and upcoming environmental challenges, and then continue on to the St. Erik neigbourhood, a modern housing development that carefully reflects Stockholm’s traditional architecture.

However, ambassador Johnston didn’t know whether the visiting royals will get a glimpse of the newest member of the Swedish Royal Family, newborn Princess Estelle.

“If they will, it would be a very private thing and that question is perhaps best asked the Swedish Court,” he told the gathered press on Tuesday.

On the last day of their visit, the royal couple will visit the Vasa Museum in Stockholm, after which there may be an opportunity for the general public to see them, at 11am on Saturday.

After that, they the Charles and Camilla will visit the Saltå Kvarn organic food company in Järna, outside Stockholm, before heading for Copenhagen and the last leg of their Scandinavian tour.