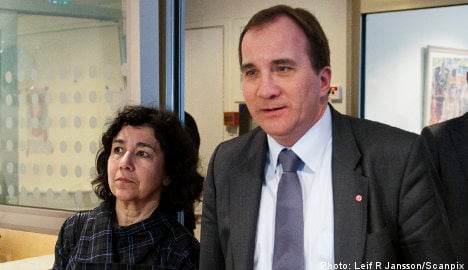 “The comments were wrong, but I still have total confidence in him,” Löfven told the Dagens Nyheter (DN) newspaper.

“It was a very constructive meeting,” Lena Posner Körösi, chair of the Jewish Community in Stockholm (Judiska församlingen i Stockholm) told the TT news agency following the talks, which were called in the wake of comments labeled as “anti-Semitic” by Sweden’s Jewish leaders.

Following the meeting, which was held on Monday at Social Democrat headquarters in Stockholm, Löfven and Posner Körösi emerged together and addressed reporters.

“We’ve now had a meeting between the Social Democrat party leadership and the Official Council of Swedish Jewish Communities (Judiska centralrådet i Sverige – JC) and discussed the situation in Malmö and respect for the rights of different minorities,” said Löfven, according to the TT news agency.

“We’ve made it very clear that we are committed to our values and the ideology of people’s equal value and religious freedom. I understand and respect the Jewish community’s concern when they view these comments as an insult to these rights.”

While Löfven expressed his continued confidence in Reepalu, he admitted that the Malmö mayor’s comments were regrettable.

“I want to improve dialogue with the Jewish community in Malmö for which Ilmar Reepalu has a great deal of responsibility,” he said.

“I have confidence in him, but it’s clear that the statements he’s made haven’t been good and I’ve been very clear that it’s unfortunately that they were viewed as anything other than what the party stands for.”

At the centre of the controversy were comments by Reepalu suggesting there were “strong ties” between the Jewish community in Malmö and the Sweden Democrats, a political party with a clear anti-immigrant and anti-Muslim line which has its roots in Sweden’s neo-Nazi movement.

He later admitted he had “no basis” for the claims, but the comments had already sparked an angry reaction from the Jewish community, prompting a letter to Löfven from the Official Council of Swedish Jewish Communities (Judiska centralrådet i Sverige – JC) demanding action.

While Posner Körösi was pleased with the meeting, she said the onus is now on Reepalu to show he can live up to the Social Democratic values emphasized by Löfven during the meeting.

“Now it remains for Ilmar Reepalu to prove it by his words and actions. Today I don’t have any confidence in him,” she said.

Reepalu on Monday said he planned to contact the Jewish community in Malmö to try to figure out how his comments became misconstrued.

He admitted he doesn’t always express himself that well, but remained emphatic in rejecting claims that he was anit-Semitic.

“Anti-Semitism is the worst form or racism that humanity has ever experienced,” Reepalu told TT.

He said he’s never held the views ascribed to him regarding alleged alliance between the Jewish community in Malmö and the far-right Sweden Democrats.