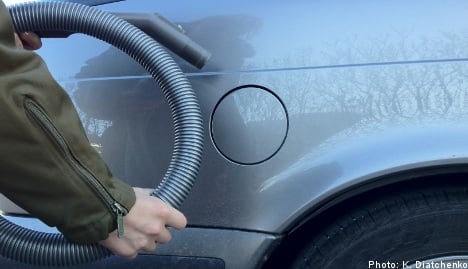 This photo is a re-creation.

The man, from outside of Örnsköldsvik in northern Sweden, couldn’t think of a better way to transfer the gasoline on Monday night, and decided to try the house-hold cleaner as a make-shift siphoning device, according to Örnsköldsviks Allehanda newspaper.

But instead of sucking in the petrol and storing it, the vacuum cleaner caught fire, forcing the man to launch it outside of the garage before any further damage was done.

However, the man was too late, as the car had already caught fire.

Shortly after, the vacuum cleaner exploded outside the garage.

The man rushed into the house to wake and evacuate his sleeping family, and called the fire department as the fire continued to ravage his garage.

Firefighters arrived shortly after and extinguish the blaze after having managed to contain the flames to the one room.

No one was injured in the incident, however the car was burnt out and the garage was damaged by the smoke.

The vacuum cleaner was destroyed in the explosion, and the remains have reportedly been binned.