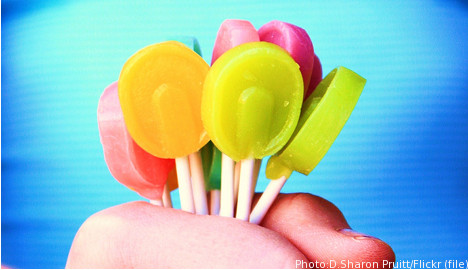 Loner borrows dog, then sells it

A man in Skänninge, southern Sweden, who claimed to be feeling lonely was loaned a pet dog by his friend, wrote the Corren newspaper on Thursday.

However, when the owner checked in on the loner loaner, he found the doggone dog gone.

It turns out the man had decided to make some quick cash and sold the mutt for the princely sum of 100 kronor ($15).

Police investigating the incident revealed that the dog-sitter had a bad history of borrowing pets, and was “well known by police” for similar incidences.

Two children aged three and four made a run for it from their home in Hallstahammar, central Sweden, on Wednesday, according to Västmanland Läns Tidning newspaper (VLT).

After they couldn’t be found within half an hour, police were called in, and several patrols were sent out to bring in the fugitives.

While police reported that the sweet-toothed children were in good spirits, they allegedly hadn’t considered the transaction at the end of the spree, and hadn’t come with the intention of paying.

The children were subsequently returned, as was the candy.

Police closed an investigation this week into the mysterious find of eight kilogrammes of cocaine amongst a ship load of South African bananas, wrote the Göteborgs Posten newspaper on Tuesday.

The ship arrived in Gothenburg, western Sweden, in December, with what police have valued as eight million kronor ($1.2 million) worth of the narcotic.

It was allegedly the captain who alerted customs officials of the find. Police have been unable to find anyone responsible for the banana boat slip-up, despite a forensic investigation on board the ship.

Mamma Mia! Benny from Abba gets his head taken off

Benny Andersson of Abba fame has now had his portrait removed from the greeting gallery of Stockholm’s Arlanda airport, wrote Dagens Nyheter.

Andersson was upset last year upon learning his beloved Stockholm site “Slussen” (“The Lock”) would be renovated, and in protest, threatened that he would have his pic taken down if no-one heeded him.

The renovations will go ahead, Benny’s face is taken down, and a poll has been coordinated by SVT to find a worthy replacement.

The winner of the poll was Brita Bergman, sign language researcher, and as we learnt from Benny himself, “The winner takes it all”. Her portrait will now hang in the gallery in Benny’s place.

It is unclear whether this means the current Abba section will now be referred to as the Aba section.