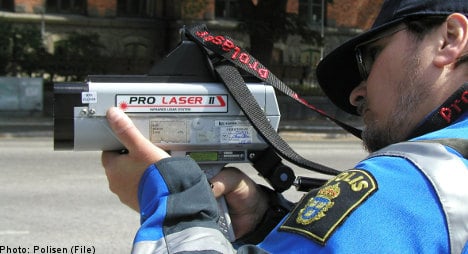 Henrik Ismarker noticed that like himself, his local police were active on the social media network Twitter.

He tweeted to the Söderort police Twitter account on Tuesday, informing them that a road near his house in Stockholm was often frequented by lead-footed drivers.

“People drive too fast in the area and that’s why I asked the police to set up a control,” Ismarker told The Local.

The police responded promptly on Twitter, agreeing that the road needed some form of speed control, especially as there was a school on the street.

The very next day, the man was driving along the road in question when he was pinged for driving 42 kilometres an hour in a 30 zone.

Ismarker tweeted the police the next day, saying “Nice that you were there already today. Unfortunately, this became expensive for me”.

When the police confirmed that he had, indeed, been caught speeding on the street, he responded: “This couldn’t be a bigger fail then. But thanks for the lesson.”

When probed about the feeling of getting caught in his own trap, Ismarker tells The Local it was “embarrassing, stupid, and a good lesson”.

However, he’s still pleased with overall response, even if it did leave him out of pocket.

“They were very professional both in traffic regulating and with Twitter,” he told The Local.

His blog entry ends with a word of advice to readers: “Drive carefully”