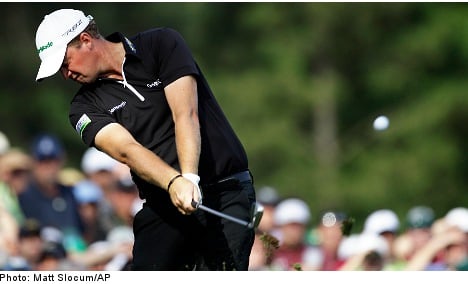 Hanson’s sensational third-round 65 had put him one stroke clear at the top of the leaderboard, but the Swede shot three bogeys on the first twelve holes to drop back out of contention.

But it wasn’t all bad news for Hanson: birdies on the 15th and 18th helped secure him a share of third, the highest placing ever achieved by a Swede at the US Masters.

The 33-year-old US left-hander became the eighth first-time major winner in a row and only the third southpaw to claim the green jacket symbolic of Masters supremacy after three-time winner Phil Mickelson and Canada’s Mike Weir.

“I never got this far in my dreams, to talk,” Watson said when asked to put his emotions into words. “It’s a blessing for sure.”

After donning the green jacket, Watson was more composed.

“It’s a dream come true,” Watson said. “It’s amazing. It’s a blur. The last nine holes I don’t remember anything. But I guess I cried all my tears out.”

Oosthuizen, the 2010 British Open champion, and big-hitting playing partner Watson battled down the final holes of the back nine at Augusta National, each finishing with a four-round total of 10-under par 278.

After both parred the first playoff hole, the par-4 18th, the tension-filled scene moved to the par-4 10th.

Watson followed off pine straw through a gap in the pines with an astounding lob shot onto the green that rolled to a stop 10 feet from the hole.

“I was down there before. Had a good lie,” Watson said. “Had a gap where I had to hook it. I’m pretty good at hooking it and I put it up there 40 yards and it rolled up there close.”

Oosthuizen rolled his third shot to the back edge of the green and missed a curling 20-foot par putt, then tapped in for bogey to leave Watson two putts to win the title.

“I had an opportunity at 10. I should have put one down the middle,” said Oosthuizen. “Great stuff to him. He deserves it. It was a great day. We had a lot of fun.”

Watson rolled the first inches past the hole then tapped in to win the title, sharing a tearful hug on the 10th green with mother Molly moments later.

Oosthuizen lost despite making an amazing albatross from the second fairway, only the fourth “double eagle” in Masters history and the first ever fired at the par-5 second hole, with a 4-iron from 253 yards.

The ball bounced onto the green, then rolled down a slope to the left and into the cup as the crowd roared in delight as “Oosty” leaped into the lead and Watson, having watched history, began working to make up a four-shot gap.

“I just kept my head down, knowing there were birdies to be had down the back nine,” Watson said. “I just kept grinding it out.”

After the albatross, Oosthuizen stumbled with bogeys at the par-3 fourth and par-4 10th but bounced back with birdies at the par-5 13th and 15th holes to reach 10-under.

Oosthuizen lipped out on a long eagle putt at the par-5 13th but birdied to reach nine under, then hit a testy eight-foot par putt at 14 and a 10-footer for birdie at the 15th.

But Watson answered a bogey at the par-3 12th with four birdies in a row, the last of them a six footer at the par-3 16th, to grab a share of the lead.

Watson also had birdies from four feet at 13, six feet at 14 and two feet at 15 after an eagle putt miss-hit.

Both parred 17, Watson lipping out on a long birdie putt while Oosthuizen got up and down from a bunker, and 18, Watson tapping in and Oosthuizen sinking a tense four-footer to force the playoff.

World No. 3 Lee Westwood of England and 54-hole leader Hanson shared third on 280.