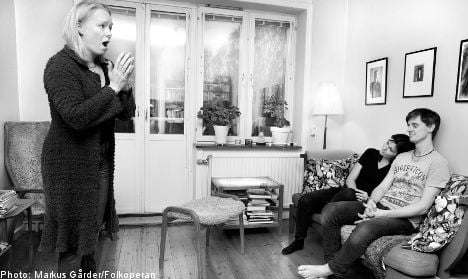 Are you lonely? Do you miss a loved one? Is your marriage on the rocks? Just place a call to a Stockholm opera and a singer will make a house call with an aria specially chosen to fit your state of mind.

“I’ve had the experience of singing for a couple who had lost touch with each other a bit,” said soprano Henriikka Gröndahl.

When she arrived at their home, it seemed the couple had drifted so far apart they would never find their way back to each other.

“They were arguing a lot, they were working in different parts of the country, sometimes communicating by notes only…” Gröndahl said.

“Two bars into my aria, she was crying and holding on to her husband, and he was very moved as well.”

The piece chosen for the couple, “Donde lieta usci” from Puccini’s “La Boheme”, is about separation. But the singer told them, “It’s not about you saying adieu to each other, but maybe you want to leave the past behind without regrets?”

The visit was part of a novel “happening” organized by the Stockholm Folkoperan, an avant garde stage intent on challenging traditional interpretations like those shown at the city’s royal opera house, Kungliga Operan.

Called “Opera Aid”, the idea was devised by British artist Joshua Sofaer, who insists it “is not music therapy.”

“We are not offering therapy of any kind. We are simply offering opera,” he said. But he acknowledged that he believes “passionately in the power of art to change lives and to offer people the opportunity to see things differently, or to be given permission to behave in a new way.”

“Opera Aid” was part of a larger Folkoperan project called Opera Showroom, which it hopes will become an annual happening. Run by artistic director Mellika Melouani Melani, it aims to bring opera, widely considered elitist, out of the confines of the traditional concert hall.

The event filled the Folkoperan with alternative and free performances for two days in late March, though the “Opera Aid” visits were spread over two weeks.

Given their private nature, Folkoperan refused to allow journalists to tag along and observe any of the 30 or so half-hour performances, which were free of charge.

Four singers, two sopranos, one mezzo and a baritone, took part, working with Sofaer to choose the arias proposed to people in need. They limited themselves to classic 18th and 19th century works.

“Those classics of Italian and German opera are the ones that I suppose most people immediately have an emotional response to,” he said.

“They cut through you somehow and get straight to your emotional core.”

More than the music, the singers had to prepare for the psychological side of the visit: how to act, listen, ask certain questions and avoid others.

“We give them the possibility to verbalize their feelings and once you’ve done that you open up a room to their innermost feelings,” Gröndahl said.

“I think the contrast for them is so big. First, we’re just an ordinary person talking with an ordinary voice and then you get … a singer who invades your room and your heart because you’ve already opened up,” she added.

“The sound changes the room,” according to Sofaer who insists the effect is long-lasting.

“There is a kind of ‘haunting’… The sound somehow lingers. If you go out of the room and return, you remember the sound of the singer in that space. The space has changed,” he said.

Gröndahl said she modulates her powerful voice during house calls to fit the private setting and direct it exclusively at the listener.

“From my experience, the impact of the voice, the music, the story is huge on the person who listens,” she said.

“It’s a personal gift… It’s the ultimate contact with the audience.”

While it may sound like an opera fan’s dream-come-true, loving music is not enough to get a specially tailored aria delivered to your home.

Anyone interested must formally apply and explain the problem they hope the music will help fix, said Folkoperan’s director Pia Kronqvist.

If you don’t have a problem, you don’t get a house call, she said.