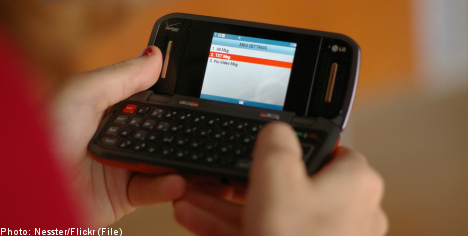 The incident was reported to Sweden’s Parliamentary Ombudsman (Justitieombudsmannen – JO) by an individual acting on behalf of the woman, who has a disability preventing her from leaving the house.

“The woman suffers from social phobia and is very timid. She has been very distressed by this,” the man said to local paper Norrländska Socialdemokraten (NSD).

The official was acting as the woman’s contact person at the municiplaity and he allegedly started texting her in the beginning of March, sending her seven inappropriate text messages in total, as well as making some dirty phone calls.

“It was very saucy. It is all about sexuality, a kind of invite. I don’t want to say more but I was pissed off when I saw that,” the woman’s representative said to NSD.

The official allegedly also threatened the woman with compulsory care if she didn’t comply, according to the paper.

The local authorities were informed of the man’s breach of conduct after a few days and when confronted by his colleagues the man duly confessed, according to NSD.

“The police are taking it very seriously,” he told the paper.

The woman’s advocate also reported the local authority’s unwillingness to deal with the incident to the Ombudsman, and their very “awkward” handling of it.

“I think they should have made him leave straight away and launched an internal investigation,” the man said to NSD.

However, the reports prompted the local authorities to act, and last week they finally filed a complaint according to Sweden’s Lex-Sarah laws, which oblige staff in the care industry to report instances of mistreatment to the authorities.

On Wednesday, after a series of meetings between the politician, his employers and his union, it was decided that the man should leave his post immediately, according to NSD.

The motivation for the official’s dismissal is that he abused his position and showed a lack of judgement, reported the paper.