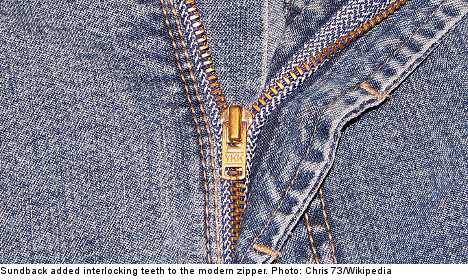 On Tuesday, Google dedicated a doodle to Sundback, the Swedish-American inventor of the modern zipper.

It featured an interactive zipper that a visitor to Google’s otherwise famously spartan home page could pull down with a computer mouse to reveal search results about the Swedish-born engineer and the doodle itself.

Sundback, who immigrated to the United States in his early 20s, didn’t invent the zipper as such — the concept was first patented by Elias Howe in 1881 — but he perfected the interlocking-teeth design still in use today.

“Google is very fashionable today with it’s zip front!” an approving Council of Fashion Designers of America said on its Twitter account, albeit with a common apostrophic error.

Google, based in Mountain View, California, frequently changes the signature “doodle” on its homepage to mark anniversaries or significant events or to pay tribute to artists, scientists, statesmen and others.

More than 1,000 have appeared over the years, including one last year that honored US music legend Les Paul by transforming the Google logo into a guitar that played when strummed with a mouse.