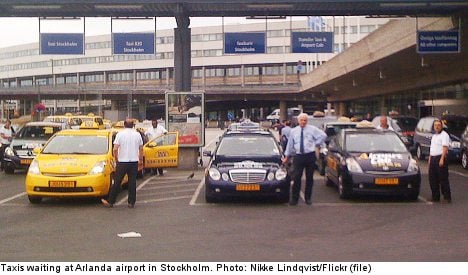 When hailing a cab in the Swedish capital, tourists should be on their guard, according to the results of a recent survey which found that visitors to Stockholm are easy prey for unscrupulous taxi drivers.

“Charging high prices is not illegal, so all we can really do is try to make tourists as aware as possible,” says Peter Lindqvist, head of the Stockholm Visitors Board.

Lindqvist fears the growing problem could have serious consequences for tourism in the country, particularly in Stockholm where it appears to be worst of all, as the situation threatens to get out of hand.

The survey exposing Stockholm’s taxi price problems, carried out by the Swedish Hotel and Restaurant Managers Association (SHR), warns that this growing problem could have a long term detrimental effect on Stockholm’s reputation and popularity among visitors.

Tourists are apparently being regularly targeted and tricked into paying exorbitant taxi bills, while hotel staff also claim they receive threats and abuse as the battle for prospective clients rages on their doorstep.

With reports in the press claiming that unsuspecting visitors have been charged as much as 2,000 kronor ($295), for a journey from Stockholm’s Arlanda Airport to the middle of the capital, several hotels have even started their own taxi companies, to ensure their guests travel with a reputable company, supplying safe vehicles and standardized pricing.

The confusion arises because there is effectively a three-tier system in operation.

The main taxi companies in Stockholm by-and-large charge roughly the same prices for the same journey. Then, muddying the waters somewhat, there are legal private companies, who are free to charge what they like, while a third group, illegal drivers, are also vying for the same passengers.

The problem of legal, but excessive charging has steadily progressed since the deregulation of the industry in the 1990s, according to Lindqvist.

Passengers caught out have no legal recourse, because the taxi companies can, in effect, charge what they like in a free market, as long as there is a meter showing the cost.

Under current legislation, the minute a customer climbs into a taxi he or she effectively enters into an agreement with the driver and are obligated to pay, no matter how high the charge ends up.

A police control recently carried out near the ferry port Värtahamn in Stockholm, revealed the true extent of the problem. The authorities discovered that some independent drivers were charging more than 20 times the amount that the larger companies charged for the same journey.

All of which could have grave consequences for Stockholm, if it cannot shrug off a reputation for conning visitors.

“It could turn into a serious problem, because tourists are going to feel ripped off and frustrated when they realize they have paid a lot for a journey that they can see would have been half the amount if they had used another company. The fact that it is legal means it is even more irritating for them,” says Lindqvist.

Meanwhile, the taxi drivers’ association is also incensed by the increasing tension caused by rogue drivers as well as high charging legal operators, and has called for a new law to fix pricing.

In a free market however, this may prove problematic.

In their defence, those smaller companies, free to charge what they like, complain that they are victimised and tarred with the same brush as illegal drivers. As a result, some claim, they are abused, threatened and have to put up with hotel staff warning their guests from taking their taxis.

These operators argue that because they cannot run in the same way as their larger rivals, who have call up operations and pre-booking possibilities, they have to, at times, charge higher rates.

Finding a solution may not be easy. There have been calls for a price capping system, but whether that in itself would help stem the rising number of rogue operators who already work outside such guidelines, is questionable.

The taxi drivers’ association urges people to always check the price sticker before they jump into a taxi on the street, but any further possible measures are tricky, because of the way the law stands.

“For us, the best thing we can do is work together with those within the industry and do as much as we can to inform people of the potential dangers,” says Peter Lindqvist.

“We need to be better at warning people at airports, train stations and hotels that there is a pricing structure depending on what company is operating the service. That way, at least they can make an informed choice for themselves. Beyond that it is hard to see what more we can do.”

There are few winners in this battle, but if it is allowed to carry on too long, Stockholm as a whole may pay the highest price of all.