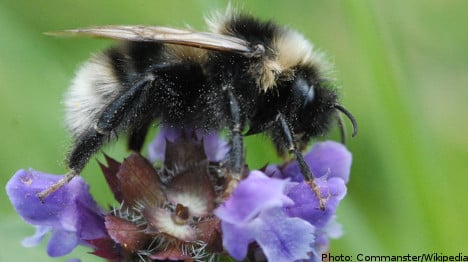 “We have worked with the Swedish authorities every step of the way on this project and have only acted with the proper permissions,” said Nik Shelton at the UK conservationist group the RSPB told The Local on Sunday.

The media attention afforded the project in both the UK and in Sweden over the weekend prompted an angry response from environmentalists and local officials who voiced concerns over the future of the species in the country.

Anneli Johansson, environmental director at the County Administrative Board in Skåne, the body ultimately responsible for the issue, condemned the project before later conceding that the board had in fact approved the UK team’s plans.

Johansson explained on Sunday that she had been informed by her staff that the British researchers were indeed in possession of all the required permits.

“According to what I have learned here this morning then all permissions for this British group are in order,” she told the TT news agency.

Johansson’s negative disposition towards the project remained unchanged however and several commentators continued on Sunday to demand more clarification on the ethics and sustainability of the project.

“I have not seen the documents yet. But I still think it sounds inappropriate. The bumblebee is a very sensitive creature which we have to protect,” she said.

Nik Shelton told The Local that the team took steps to ensure that the population in Skåne was significant enough to carry out the project.

“Of course we would never embark on any project that would put a wild species in danger, wherever in the world it may be, and that is why we sought full assurances from the Swedish authorities that there was a large enough population in Skåne.”

Entomologist Björn Cederberg at the Swedish University of Agricultural Sciences has acted as a Sweden consultant for the British project.

“I was also negative at first, but then it turned out that these researchers were serious and wanted to do this correctly,” he told TT.

The project has been approved by the Swedish Board of Agriculture and Cederberg is hopeful that if successful may prove as a model for the translocation of other endangered species.

He welcomed the uproar, expressing a hope that “other threats to bumblebees are also given attention through this”.

Nik Shelton also welcomed the discussion and invited those within the field who had expressed concerns to discuss the matter.

“We look forward to speaking to anyone in the area who has concerns and hopefully we can set their minds fully at rest.”