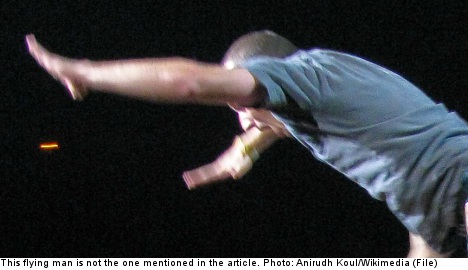 The incident took place a bar in Hallstahammar, central Sweden, during a post-Walpurgis concert which the 20-year-old woman had attended.

But the woman’s revelry took a turn for the worse when she suddenly found herself pinned to the floor by the weight of a strange man who had unexpectedly come flying through the air.

“There was someone who decided he wanted to do a stage dive,” Per Strömbäck of the Västmanland county police told the Aftonbladet newspaper.

“He was going to dive out over the crowd, but it didn’t really turn out as he had planned.”

According to Strömbäck the overzealous music fan had failed to alert members of the audience that he planned to make himself airbourne.

“That would have been the smart thing to do before taking a flying leap,” Strömbäck added.

Instead of finding himself floating along on the arms of enthusiastic concertgoers, the man instead crashed into the 20-year-old woman who had been paying more attention to the music than to the crazed fan whose ill-thought antics inadvertently ruined her night out.

After suffering a strained neck, as well as numbness in her arms and legs, the woman was taken to hospital for treatment for injuries described by Strömbäck as “not serious”.

Nevertheless, the police have filed a report of someone having caused bodily harm to another.

“We currently don’t have any suspects,” Strömbäck told the TT news agency.