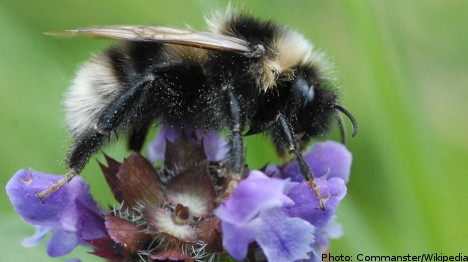 “It’s just sad what’s happened. No one wanted to kill me, but I got threatened to keep away,” said Doctor Nikki Gammans to Sveriges Radio (SR).

“One person said ‘stop this girl at any cost,’” Gammans told the TT news agency.

Gammans belongs to a group of researchers who plan to collect 100 queen short-haired bumblebees in the hope of reintroducing them in England.

The group had previously received the green light from Swedish agriculture authorities and on Thursday the County Administrative Board in Skåne also agreed to let the project move forward.

Nik Shelton of the UK conservationist group the RSPB previously told The Local that the team took steps to ensure that the population in Skåne was significant enough to carry out the project.

However, the team has been caught in a media buzz ever since their mission was revealed, with bee enthusiasts Sweden-wide upset that the insects’ population was endangered and could face extinction.

It was initially believed that the researchers were acting without permission from Sweden; however, it soon came to light that Swedish authorities had indeed given the go-ahead, and are supporting the project.

“We are very positive about the project after the information we received today following a meeting with the British research team, and we are confident that this cannot do any damage to the Scanian population of Nuevo Bumblebee,” said Anneli Johansson, environmental director at the County Administrative Board in Skåne, to SR.

The researchers intend to take the bees from two areas; between Landskrona and Lund, and from Trelleborg to Ystad, all in the south of Sweden.

The short-haired bumblebee population has shrunk considerably in recent years and is now largely extinct in much of central Europe.

A previous British attempt to reintroduce the species with the help of bees from New Zealand in 2009 failed when all the bees died while in quarantine.