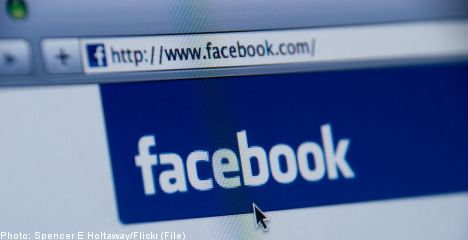 Under questioning by police in Ludvika in central Sweden, the man admitted that he had hijacked his ex-girlfriend's Facebook account, the local dt.se news website reported.

Later that night, the woman received calls from several of her friends warning her that nude images of her had been posted on the popular social networking site.

According to dt.se, the man had obtained the images when the two were still a couple.

In addition to posting the compromising images of the woman, the 30-year-old also engaged in sex-themed chats with other Facebook users in his ex-girlfriend's name.

Under questioning by police, the man explained he had guessed at the woman's password and that he didn't know logging into someone else's Facebook account without their permission was against the law.

Nevertheless, he has now been charged with computer hacking and libel and if convicted could face up to two years in prison.

In addition, the woman will likely sue for damages to compensate for the suffering she underwent as a result of the incident.

Yngve Andersson of the Ludvika police said "facerape" and other forms of internet-based harassment have become increasingly common in Sweden.

"It's a regrettable development and there are many who see it as a chance to get back if a relationship falls apart," she told dt.se.