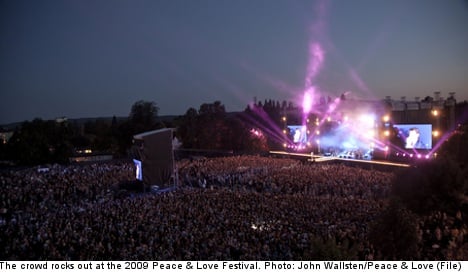 As Swedes head into June, and with warmer temperatures becoming a day-to-day norm, many have begun making their plans for this summer’s festival season.

With a host of extravagant line-ups up and down the country, Swedes will certainly have a vast array of choice when it comes to deciding their musical port of call.

And with competition between festivals hotter than ever, festival bosses will be looking to pull out all the stops to get every pitch on their campsites filled.

So for anyone looking to let loose, slosh in the mud, and listen to some great music in Sweden, The Local has put together a list of this summer’s “don’t miss” music festivals, starting with the highlights for June.

The organizers of Hultsfred have certainly invested heavily in a mouth-watering line-up this year, as they continue to rise from the ashes of their financial oblivion of 2010.

Headliners The Cure, The Stone Roses and Gorillaz will certainly whet the appetite of music-lovers across the country and the world. The appearance of Noel Gallagher with his High Flying Birds, spliced with the inevitable re-living of the Oasis years, will certainly draw the attention on the festival’s final day.

Elsewhere, fans of Mumford and Sons will be delighted to see them grace the festival stages of Sweden at Hultsfred, whilst Jamie XX could be set for a tantalising combination with the XX for a remix treat on the Saturday.

Who says you have to head out of town to experience all the excitement of a Swedish summer music festival?

Stockholm’s biggest city festival arrives on June 15th as Summer Burst takes to the Olympic Stadium on the 100th anniversary of the 1912 Stockholm Olympics.

Dance and House fans will certainly be drawn to this one, with club icons David Guetta, Cavin Harris and Tiesto amongst the weekend line-up.

Learn more about who else is on stage as well as how to get tickets on the Summer Burst festival website.

Elsewhere, the Rix FM festival will once again tour the country, with the free show at Kungsträgården on June 10th likely to attract large numbers from across Stockholm.

Find out the complete line-up of artists and tour dates on the Rix FM Festival website.

June draws to a close with Peace and Love Festival’s bumper five-day package of artists which is sure to attract the large numbers it has boasted over the last decade.

Many will flock to the festival in Borlänge in Dalarna, central Sweden, at the prospect of seeing international superstar Rihanna alone. With Rihanna in town, festival bosses are hoping ticket buyers will be there to witness ‘a piece of musical history being made.’

The American diva is amongst a line-up that includes Skrillex, Billy Idol, and former Glastonbury headliners Bloc Party.

And Swedish super-group Roxette is also schedule to perform, according to the Aftonbladet tabloid.

For ticket and other information, visit the festival’s website