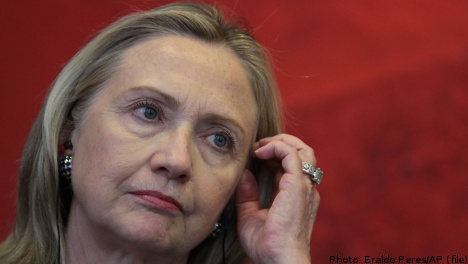 On Friday Clinton met with survivors from the Utöya massacre.

“On issues of security and peace, on human rights and development, the US has no better partner than Norway,” said Clinton with a smile, whilst attending a lunch hosted by Norwegian Prime Minister Jens Stoltenberg.

Clinton had specifically requested a meeting with survivors from last summer’s massacre at Utöya, and on Friday afternoon met with Eskild Pederson, leader of the social democratic youth party AUF, and several others, reported news agency NTB.

Clinton also discussed the Arctic Tromsö area, as well as concern for the continued flow of weapons into Syria with her Norwegian colleague Jonas Gahr Störe.

Both the Arctic and Syria are likely to be top of the agenda in Sweden as well. On Saturday evening, when Clinton lands on Stockholm airport Arlanda’s tarmac, Foreign Minister Carl Bildt will be there to welcome her.

Her 24-hour visit in Stockholm looks to be jam-packed with meetings.

Clinton will be meeting Carl Bildt and Defense Minister Karin Engström for talks on a boat trip through Stockholm’s archipelago, meeting Prime Minister Fredrik Reinfeldt and discussing how to lower emissions causing climate change at an environmental conference together with Crown Princess Victoria.

Sweden’s foreign ministry and police force prepared for the visit on Friday, planning for the huge safety measures which surround Clinton’s visit. In Norway, the Secretary of State’s motorcade consisted of no fewer than 13 cars, and they won’t be any fewer in Stockholm.

As Clinton’s visit coincides with Stockholm Marathon on Saturday and a veteran car event on Sunday, traffic trouble is to be expected.

“Where the motorcade passes by we’ll stop all other traffic so that they can pass,” said Stockholm police officer Kjell Lindgren to news agency TT.