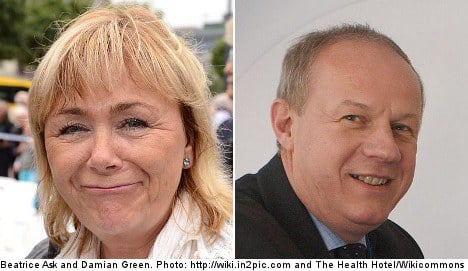 The letter, penned by UK Minister for Immigration Damian Green, takes up the murder and beheading of Christopher Varian, who was decapitated with a cheese knife at the Oxfordshire Golf Club in August 2010, according to UK media reports.

In March 2012, Jonathan Warg Limani, a Swedish citizen originally from Albania, was sentenced to 19 years for the killing after pleading guilty to manslaughter with diminished responsibility.

According to the Guardian newspaper, Limani, 33, had a history of mental illness and paranoid schizophrenia.

According to Green’s letter, Limani had arrived in the UK from Sweden just three weeks prior to the killing.

“Before coming to the UK we believe Mr Limani was involved in an incident in Sweden in which he took a police officer’s firearm and that he was on police bail over this incident,” Green writes in his letter to the Swedish justice minister.

According to Sveriges Radio (SR), Limani was at the time suspected of assault and preparing to commit manslaughter after hitting someone with a side view mirror and threatening to kill the person.

He also allegedly attempted to steal a gun out of the holster of a police officer.

In his letter, Green explained that he had been asked by the parents of the victim to find out why Limani had been released on bail and allowed to leave the country despite being suspected of such a serious crime.

“l recognize that none of our systems is perfect, the UK included. We are looking into our own arrangements for processing this sort of information both within the UK and further afield within the EU,” he wrote.

“We would be happy to share with you the emerging findings of this work and discuss ways in which we could work together to try and improve the flow of information between member states on this sort of criminal case.”

Limani was initially a set to be tried in the UK for murder, but the charges were reduced to manslaughter after several psychiatric investigations concluded he was mentally ill, the Independent newspaper reported.

According to the account of event told in court, police were called to the golf club where they found Limani sitting next to Varian’s decapitated body and arrested him on the scene.