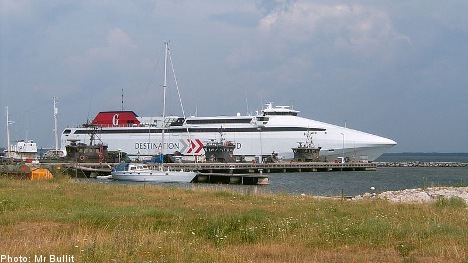 The Destination Gotland departed Visby at 7.20am on Saturday morning heading for Oskarshamn on the Swedish mainland with the man onboard.

But as the vessel was about 200 metres away from the quayside the man was seen to apparently fall from the ferry and into the chilly Baltic waters.

The man was plucked out of the water by staff in an rescue boat and rushed to Visby hospital.

After police officers interviewed him on Saturday afternoon it emerged that the man had not fallen from the ferry, but had instead leapt by his own volition, according to the Helagotland report.

The man told police that he didn’t want to remain on the ferry and had instead decided that he would swim back to port.

Witnesses have confirmed how the man climbed the railings on the boat and leapt into the water, proceeding to swim towards land.

Medical staff at Visby hospital have confirmed that the man it in good shape under the circumstances but that he is suffering from mild hypothermia.

It remains unclear whether the man with be charged with any offence or the reasons for why he decided to abort his trip.