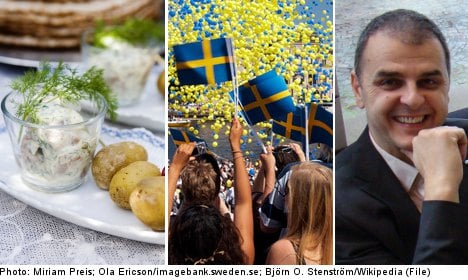 “Where are you from?” I ask the taxi driver who takes me to the airport in Sweden.

“Where is ‘home’? Somalia or Sweden?”

“Do you feel Swedish?”

“No, not in the least. It takes several generations to become Swedish.”

When I land in Washington, DC to study integration in the United States, I pose the same questions.

“Is ‘home’ Afghanistan (where the taxi driver comes from) or here?”

“Do you feel American?”

“Of course. What else would I be?”

This is discouraging. The Americans, and several other nations, have obviously been better at developing a sense of belonging; both among their immigrants, and among their majorities.

Sweden has failed to do so.

If one views integration as a process that isn’t just about jobs, but also about a sense of community; of shared identity and belonging, then Sweden is lagging behind. The problem is that without this feeling, without a common identity, without a “Swedishness” that we can share, we will not succeed with integration or manage to create a country that has a place for immigrants.

The reason we have failed is that we have assumed that refugees (who have dominated Swedish immigration) have fled misfortune in their countries and want to return when the opportunity arises. We opened our doors to offer protection, but as a result we saw these people as a diaspora that was more focused on what they had left behind and less on their future in Sweden.

We handed out subsidies to help people return and ensured mother tongue language education, but the idea that we should create a sense of shared identity has almost been viewed as some sort of assault.

My own proof of citizenship dropped into the mailbox in a wet, beige envelope. The next day I was informed that Sweden offered “return subsidies”.

Was that really a way to be welcomed into a community?

Immigrants have also made mistakes.

Since their stay in Sweden was regarded as temporary, many lived with suitcases in the hall; partly because it was hard for them to break with the past, partly because the signals from Swedish society were ambiguous. The myth of a return to one’s country of origin became an obstacle to integration.

I know people who, after thirty years in Sweden, do not have Swedish friends, who socialize only with their fellow countrymen, and are more engaged in events that take place in their home countries than in Sweden. You live in some sort of “standby mode”, in a no man’s land, belonging to neither the country you live in nor the country you came from.

Satellite dishes maintain the illusion of contacts with your country of origin and a return – but a first return visit on vacation shows what a stranger you are.

It’s time to get beyond the myth return and begin to focus on creating a common identity that we can share. We should create a new “we”, a new Swedishness, transparent and inclusive, that both Swedes and immigrants can be proud of; an identity that unites us and doesn’t divide us. It should give immigrants a sense of belonging that they often miss and offer them an opportunity to stop wandering.

A country must have a social glue that serves as the basis for solidarity among citizens. It gives legitimacy to state institutions and officials, it makes the exercise of power be seen as legitimate. The social glue is portrayed in the ideal of citizenship as it answers the question of who constitutes “we”.

But there are different ways of defining “we”.

The Sweden Democrats and other nationalists have made their pitch: what keeps us together, gives us power, strength and identity are the thick ties of ethnicity and culture. Therefore, according to them, rootlessness is a sin, cosmopolitanism crippling, Brussels the enemy, and the EU a foreign power.

According to them, we belong together simply because we are ethnically and culturally similar.

Zlatan and Loreen need not apply in the land of the Sweden Democrats.

If the rest of us want to deal with the nationalists, we need to formulate our response. By infusing civil citizenship with meaning; by talking about the values that should form the basis for society, we can create a common future and a unified country.

Until we learn how to send such an inclusive welcoming signal, no immigrants in Sweden will feel Swedish.

We need to think through our integration policy, make the necessary changes, and begin to regard immigrants as part of the collective story of this country’s future, not just its past. I don’t need to do more than gesture a little with my hands for someone to come up and say “oh, how wonderfully un-Swedish you are”.

Immigrants, for their part, must step forward and begin to imagine their future in this country. Neither the myth of return nor stories of discrimination can be the dominant narratives.

If we don’t rise to the challenge, we’ll be capitulating to those who want Swedishness to be defined ethnically or culturally.

And as for me, I’d rather see a thin, constitutional solidarity that specifies within the contract of citizenship what immigrants should do to become a part of society (like the US) than thick, cultural affiliation requirements that allow me, after 19 years in Sweden, to still be called “wonderfully un-Swedish” when I gesture a little with my hands.

Rather precise requirements for citizenship than the obscure and life-long requirement to love herring and potatoes.

Rather a debate on what Swedishness should be, than the vague and unspoken consensus on what it is.

Jasenko Selimovic came to Sweden in 1992 as a refugee from the war in Bosnia. He is currently a State Secretary within the Swedish Ministry of Labour, but is writing here in his capacity as a member of the Liberal Party (Folkpartiet).

This article was first published in Swedish in the Dagens Nyheter (DN) newspaper.