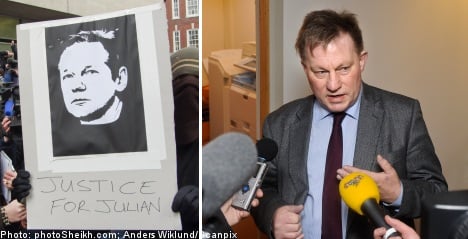 “I cannot imagine that Ecuador will give him asylum,” lawyer Claes Borgström told the TT news agency after Assange walked into the Ecuadorian embassy in London Tuesday and applied for political asylum, as time ran out in his marathon legal battle to avoid being sent to Sweden.

The request for asylum came after Britain’s Supreme Court last week rejected an application by Assange to reopen his appeal against extradition, effectively closing his last legal avenue in Britain, although he could still take his case to the European Court of Human Rights.

“This is a new attempt to stop or delay the legal review he must go through in Sweden for justice to be served,” said Borgström, who represents two Swedish women who claim Assange raped and sexually assaulted them.

Following the move, police in the UK said Wednesday that Assange had breached bail conditions by entering the Ecuadorian embassy and is subject to arrest.

The conditions include staying at his bail address between 10pm and 8am and “he is now subject to arrest under the Bail Act for breach of these conditions,” a Scotland Yard spokeswoman told AFP.

However, the Foreign Office said late Tuesday that because Assange was in an embassy he was on diplomatic territory and “beyond the reach of the police”, although it said it was working to resolve the situation.

Assange, a 40-year-old Australian former computer hacker, does not deny that he had sex with two WikiLeaks volunteers in Sweden while attending a WikiLeaks seminar in August 2010, but insists the sex was consensual and argues there are political motives behind the attempts to extradite him, and that the real aim is for him to be handed over to US authorities.

WikiLeaks enraged Washington by releasing a flood of classified US information about the wars in Iraq and Afghanistan.

It also published more than 250,000 classified US diplomatic cables, revealing often candid assessments of a huge range of issues as well as the views of other governments.

If the country does grant the 40-year-old WikiLeaks founder asylum, “they would be placing themselves above the European arrest warrant and it would also mean very sharp criticism of the United States,” Borgström said.

“I expect that Ecuador is a state of law that will follow international rules in this area,” he added.

The lawyer described Assange’s request as “very, very unique,” pointing out that “usually people seek asylum because they cannot get the protection they need in their own country.”

The Swedish prosecution authority, which issued the European arrest warrant for Assange and is expecting him to be in Sweden by early next month, meanwhile said it would not comment on his asylum request, stating only that such an application “has nothing to do with the Swedish criminal investigation.”