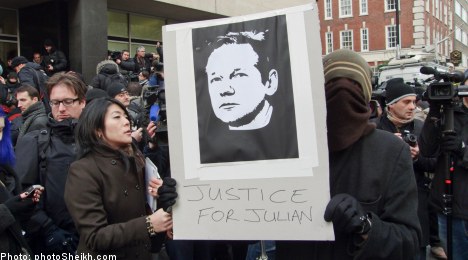 “Ecuador is a country which defends the right to life. We have to see whether there is a threat to Julian Assange’s life,” President Rafael Correa told AFP.

Assange turned up in Ecuador’s embassy in London on Tuesday in a dramatic bid to avoid extradition to Sweden over alleged sex crimes.

Assange maintains that the allegations are politically motivated and that Sweden will deport him to the United States to be put on trial for WikiLeaks’ disclosure of a huge trove of US classified documents.

“We will take the time necessary because this is a very serious affair that we take with absolute responsibility,” President Rafael Correa said on Wednesday in an interview with the South American cable TV network Telesur.

The leftist Ecuadoran leader, who has often been at odds with Washington, was attending the Rio+20 summit on sustainable development.

“Ecuador is a country which defends due process. We have to assess whether

he was accorded due process. Ecuador is a country which rejects persecution on ideological grounds,” Correa told AFP.

“He (Assange) presented his reasons. We are going to verify them…We will take the time necessary, with absolute seriousness and absolute responsibility,” he added.

there is no freedom of expression in Ecuador.

Ecuador’s Foreign Minister Ricardo Patino had earlier said on his Twitter account that the government was studying Assange’s charge that he risks being tried for political reasons and could be sentenced to death.

“Ecuador declares that it will protect the human right to life and to freedom of expression,” Patino said, adding that Assange’s request for political asylum “requires profound analysis.”

With time running out in his marathon legal battle to avoid being sent to Stockholm, the 40-year-old Australian walked into the embassy Tuesday and claimed asylum under the United Nations human rights declaration.

The request is the latest twist in a case dating back to December 2010 when the founder of the whistle-blowing website was first detained in London on a European arrest warrant.

Anna Alban, the Ecuadorian ambassador, said in a statement on Wednesday that she had held “cordial and constructive” talks about the asylum bid with Britain’s Foreign Office.

“I also emphasised to the UK government that it was not the intention of the Ecuadorian government to interfere with the processes of either the UK or Swedish governments,” she added.

The embassy said Assange would remain in the building under the protection of the Ecuadorian government while his application is considered.

But police said that by spending the night there, Assange had breached conditions to stay at his bail address between 10pm and 8am and “he is now subject to arrest under the Bail Act for breach of these conditions”.

Britain’s Foreign Office said however that because Assange was still on diplomatic territory he was “beyond the reach of the police”.

A group of eight supporters gathered outside the building in the upmarket Knightsbridge district, waving “Free Assange” placards.

The embassy confirmed it would be seeking the views of London, Stockholm and Washington to ensure it complied with international law.

Assange exhausted all legal options in Britain last week when the Supreme Court refused to reopen his appeal against extradition.

He has until June 28th to lodge an appeal at the European Court of Human Rights in Strasbourg.

General Nicola Roxon, which he took as a “declaration of abandonment”.

In the letter to one of Assange’s legal representatives Roxon made it clear that Canberra would not seek to involve itself in any international exchanges about his future.

WikiLeaks enraged Washington by releasing a flood of classified US information about the wars in Iraq and Afghanistan, as well as more than

250,000 classified US diplomatic cables that embarrassed a slew of governments.

Vaughan Smith, a supporter of Assange who hosted him at his country mansion for 13 months, told BBC television:

“I genuinely believe that he fears for his life and he fears that if he goes to Sweden he’ll be sent to America.

“And you only need to look at the treatment of Bradley Manning by the Americans to feel that he’s right to be fearful.”

Manning, a US soldier, is facing trial on charges of passing a huge cache of documents to WikiLeaks.

Ecuador offered Assange residency in 2010 after expressing concern about

some of the alleged US activities revealed by WikiLeaks.

Although Quito later backtracked on the residency offer, Assange appeared to hit it off with Correa in April in a talk show interview aired by Russia Today, a television network that backs Russian President Vladimir Putin.

Correa welcomed Assange to the “club of the persecuted” in the interview, and Assange reciprocated by expressing support for Correa in his bitter battles with Ecuador’s privately owned media.