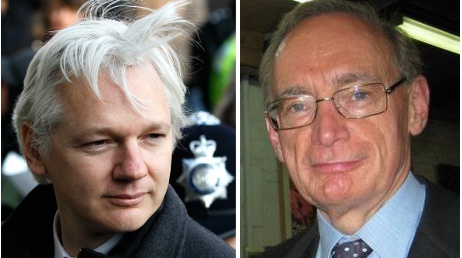 Assange, an Australian, took refuge in Ecuador’s embassy in London on Tuesday to seek asylum so as to avoid his extradition to Sweden on rape allegations, saying he fears Stockholm will hand him to the United States.

Carr said he had raised the issue of the possible extradition of Assange, a former computer hacker, to the US on two occasions with American officials.

“When I have raised it… I’ve received no hint that they have got a plan to extradite him to the US,” Carr told the Australian Broadcasting Corporation.

Assange says he believes the United States wants to try him for divulging US secrets after WikiLeaks released a flood of classified US information about the wars in Iraq and Afghanistan, and more than 250,000 classified US diplomatic cables.

But he has conceded there is no current US indictment against him.

“Of course not, at the moment the matter is before the grand jury,” he told Australian media on Friday. “Until it comes out of the grand jury there will not be such evidence afforded.”

Carr said he had no indication this was going to happen.

“There’s not the remotest evidence that that is the case. No US figure has confirmed that to us,” he said.

“I suppose you could argue they wouldn’t confirm it to us to the last moment. You could say that the justice department is proceeding on this and US officials in state or in a diplomatic mission like in Canberra wouldn’t be aware of it. Certainly that can’t be discounted as a possibility.

“They haven’t been able to rule out that one corner of the American administration might not be considering it, but I would suspect that the US would not want to touch this.”

Carr said if the US, a close ally, had wanted to extradite Assange they could have done it during the two years he has been in Britain, a country with which Washington has a “robust extradition arrangement”.

Assange, 40, dramatically sought refuge in Ecuador’s London mission last week, saying he felt his country of birth had not protected him, a claim dismissed Sunday by Attorney-General Nicola Roxon.

“What Mr Assange and his supporters… seem to misunderstand is that there is nothing that the Australian government can currently do that it has not been doing,” she told Channel Ten’s Meet The Press.

Roxon said Canberra had only limited powers in the case because Assange — who she said she did not believe was “either a hero or a villain” — was not in Australia or charged with an Australian offence.

“He is at the moment subject to a complaint in Sweden, which is a criminal matter, and we believe Australians need to adhere to the criminal laws of other countries,” she said.

“That’s not abandoning an Australian, that’s actually just saying people have to comply with other countries’ laws.”