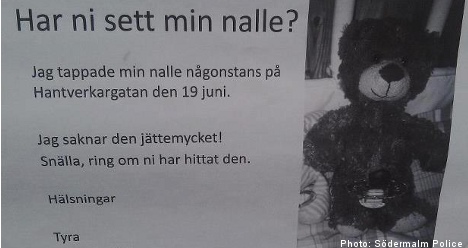 When Kristin Blomqvist’s daughter Tyra lost her teddy bear on Tuesday, her family sprang to action and posted “missing teddy bear” posters around the Stockholm island of Kungsholmen.

“The teddy bear really means a lot to her. She can’t sleep properly at night without it, and she searches for it when she wakes in the morning,” said the distressed mother to the Nyheter24 news website.

The posted signs read: “Have you seen my teddy bear, I dropped it somewhere on Hantverksgatan on June 19th?”

One of the missing teddy posters was noticed by a local police officer, who took a photo and uploaded it to the official Södermalm police Facebook page, together with a caption urging fans of the page to join the search

“Together, through ‘liking’ this picture, spreading the link, and keeping our eyes open, we can together make it so Tyra gets her beloved teddy bear back,” the post on the police Facebook page reads.

“Be sure to leave the bear at the nearest police station so Tyra can see her friend again!”

The image, which was uploaded on Sunday, has garnered almost 500 likes on Facebook, and over 100 shares.

As the comments came flooding in showing support for the missing bear, one man who questioned police priorities received a quick response from a police inspector:

“The article above was written by an off-duty policeman, so the cost to us was zero. If we, through two minutes’ work, can help her get her friend back, we’d say it’s good prioritizing, don’t you think?”

However, despite the growing support from avid Facebook users in Stockholm, the bear has still not shown up.

“We still haven’t heard anything yet, but it feels good to know that people want to help out,” said Tyra’s mother to Nyheter24.