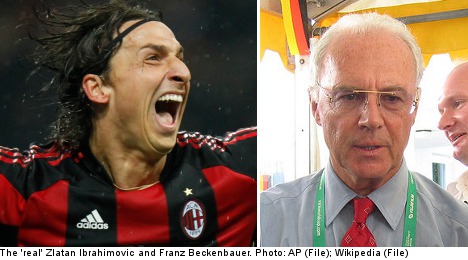 “I hope that in the future he will score a lot of goals playing for Santa Cruz,” proud father Beckenbauer said of his newborn son to Brazil’s SporTV News, referring to the Recife-based football club Santa Cruz.

It remains unclear why the passionate Santa Cruz fan named his son after the 30-year-old Swedish striker, despite initial concerns by administrative personnel when Beckenbauer went to register his son’s birth.

“The woman said she had to send it to the judge for approval. I objected… If my name was Beckenbauer, why could his not be Ibrahimovic?” he told SporTV News.

But Beckenbauer didn’t stop at naming his son after who many consider to be Sweden’s marquee offensive player in hopes he would become a future Santa Cruz star.

The proud father also promised to bury the young Zlatan’s umbilical cord beneath the Santa Cruz’s stadium to celebrate the team’s recent title.

According to SporTV News, Beckenbauer isn’t alone among Santa Cruz supporters who have chosen to name their children after European footballing greats.

The “real” Franz Beckenbauer was a star defender for the West German national team and for Bayern Munich in the 1960s and 1970s.

He was twice selected the European Footballer of the Year, leading Germany to World Cup victory in 1974 as a player, and in 1990 as coach.