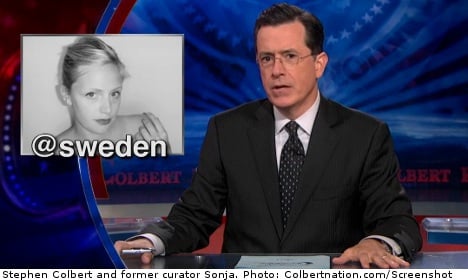 “Although we appreciate that having Colbert as a Curator of Sweden would be meaningful in terms of global attention to this initiative, VisitSweden and the Swedish Institute have decided to – after thorough consideration – decline his generous offer,” the agencies said in a statement released to The Local.

“The account is – at the current time – first and foremost a way for us to hand over the voice of Sweden to the Swedes.”

Frida Roberts, Head of the Communications Unit at the Swedish Institute, called Colbert’s proposal “tempting” but argued that the Curators of Sweden initiative, which allows a different Swede control the @sweden Twitter account each week, is primarily for “Swedish citizens”.

”It’s been very exciting to realize that Stephen Colbert has such a strong interest in Sweden and our culture,” said Maria Ziv, Director of Marketing at VisitSweden.

She added that she would be “delighted” to invite Colbert over to Sweden so that he can “experience the openness and diversity of the Swedish society on the spot”.

Johannes Karlsson, the head of PR and Social Media at Visit Sweden, who had been singled out by Colbert as an “obstacle” to the US comedian’s impassioned plea for control of @sweden, echoed Roberts’s sentiments.

“This is an account and an initiative we are very dedicated to, it was made for Swedes and I hope Mr Colbert can appreciate that,” he told The Local.

The news comes after two weeks of to-ing and fro-ing between Colbert and Swedish officials about whether or not he would be allowed to tweet for Sweden.

Former @sweden curator Sonja Abrahamsson put the account on the world stage two weeks ago when she tweeted “whats the fuzz with jews”.

Her question, followed by her musings on the Jewish community, her breasts, and her unusual food descriptions, prompted the US comedian to launch #artificialswedener – a campaign for Colbert to take over the account himself for one week.

While authorities initially laughed off the comedian’s plea, Colbert’s segments continued, prompting Swedish officials to respond that they were “amused” and “in discussions” about the possibility of the takeover – even though the rules stated that a curator must be Swedish to control the account.

Last week, Colbert threatened to “cut off all diplomatic relations with Sweden” if his wish was not granted, before bursting into a version of Abba’s Take a Chance on Me.

Colbert’s joking aside, Karlsson emphasized that he and his colleagues took the request seriously.

“We’ve had real flesh and blood meetings about the whole thing for days now, and even though it’s a no, we hope to maintain good relations with Mr Colbert and his many fans,” he said.

When asked if there was any other celebrity who may have the power to take the @sweden Twitter throne, Karlsson laughed.

“No, we wouldn’t say yes to any of them at this point – unless they were a Swede,” he said.

In the meantime, Karlsson is happy to sit back to see how Colbert reacts to the invite to visit Sweden in person.

“It’s an open invitation, and I’m looking forward to seeing where things go from here,” he told The Local.

The Curators of Sweden initiative has been running since December, and won the Grand Prix award at the Cannes Lions International festival of Creativity for the best international viral marketing campaign on Wednesday.