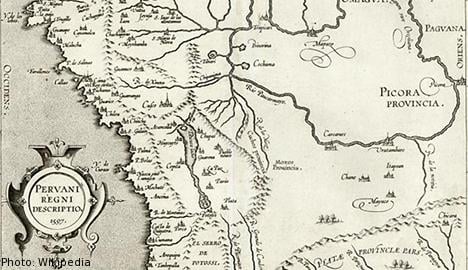 “We could not be more pleased to know that this national treasure is finally making its way home,” said Gunilla Herdenberg, a library representative, calling the atlas “an irreplaceable piece of the library’s collection and Sweden’s cultural heritage.”

The atlas, containing 19 rare maps, vanished alongside 55 other books, a theft later attributed to the former head of the library’s manuscript department, Anders Burius, who committed suicide in 2004.

Burius was found to have been pilfering rare books to a value of at least nine million kronor ($1.4 mllion) from the library’s collections and selling them off at auction houses worldwide for a number of years.

The work had belonged to the Royal Library for 300 years when it disappeared and was sold for the first time in 2003, before the thefts had been discovered, and has reportedly changed hands a number of times since then.

Its value has increased greatly as well, from about 600,000 kronor at the time of the first sale to approximately 1.8 million kronor when recovered in the states last year.

Officials were alerted to its whereabouts when they noticed it was being offered for sale by New York’s Arader Galleries in June 2011, who had purchased the piece at Sotheby’s auction house in London, according to the law office of Herrick, Feinstein LLP hired by the library to help retrieve the work.

Upon discovery of its origins, the Arader Galleries returned the atlas to Sotheby’s, who subsequently restituted it to Sweden.

Most of the other missing works were sold in the 1990s by a German auction house.

The collections at the National Library contain over 15 million books and pamphlets with everything from medieval bibles to the latest IKEA catalogue.

The library is obliged by law to collect anything printed in Sweden. Since 1661 all printing houses must send at least one example of each thing they print to the library.

The dramatic life of the library specialist turned book thief was made into a TV-series called “Bibliotekstjuven” (“Library-thief”) in 2011 by Sveriges Television (SVT) with Swedish actor Gustaf Skarsgård, brother of True Blood star Alexander Skarsgård and son of world renowned actor Stellan Skarsgård, in the lead role.