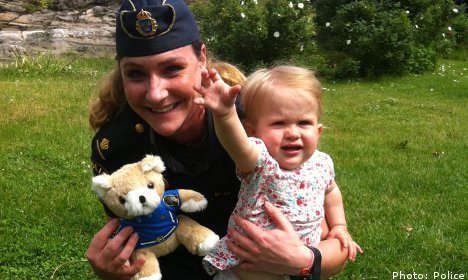 When an off duty police officer noticed a “Missing” poster for a teddy bear in Kungsholmen, they shared the details on their official Facebook page, hoping Tyra Blomkvist would be reunited with her beloved bear.

The story caught the attention of international media following The Local’s article on Monday, yet when the bear still failed to show up by Wednesday police took matters into their own hands.

“The police arrived with a new teddy bear, it was a real surprise!” Tyra’s mother Kristin told The Local.

Police explained the move on their Facebook page, which received another overwhelming response from their fans and was liked over 600 times that night.

“When our attempts failed to give Tyra her own teddy back, we instead gave her our police mascot as consolation,” the Södermalm police wrote on their page.

They went on to explain that the mascot bear is usually given to children who have suffered trauma, or when officers want to send a child a memento.

“Even if it seems that Tyra’s not appreciating the teddy in the picture, we hope that we, together with this story, will feature as a little chapter in her life,” they wrote.

Tyra’s mother explains that her daughter was thrilled with the surprise.

“She was quite happy indeed; she really likes the new bear,” she said.

When asked if she expected the original bear to show up again, Blomqvist remained positive.

“Yes, we hope so. Now that the story has gone around the world, someone should know something!”