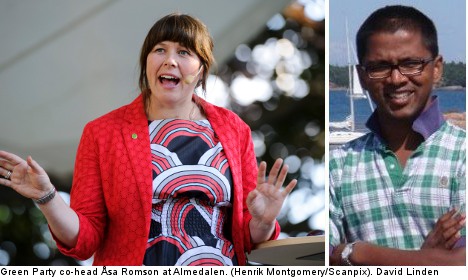 The Swedish Green Party (Miljöpartiet) has gone from being nerdy to trendy. In the 1980s, when they were a new phenomenon, the Economist described the party “nutty but well meaning”.

Today they are a serious political party that could be in government after their next election. Despite their new found professionalism, they have maintained the structure of the old pro-environment party. For example, they have two leaders who are referred to as språkrör (which translates literally as “speech pipe”, but is commonly known in English as ‘spokesperson’).

One is Gustav Fridolin who is young, charismatic and has a touch of Barack Obama in his rhetoric. The other one, Åsa Romson, is a bit more of an environment nerd…something which isn’t too hard to fathom when you see her.

On Monday, Romson spoke in Almedalen for the first time. She was clearly nervous and thought that the audience would have rather listened to Fridolin – or former Green co-head Maria Wetterstrand, who received a lot of the credit for the party’s recent success.

But Wetterstrand had stepped down and Fridolin was on paternity leave, leaving Romson alone on centre stage.

But Romson had a solution for anyone concerned that she lacked the requisite star quality to wow the crowds at Almedalen.

She invited Pär Holmgren, a famous TV-weatherman, up on stage to talk about climate change. The folksy Holmgren, who is also very engaged in climate issues, was a hit with the crowd.

His part of the presentation was very entertaining and felt like more of a discussion. When Romson said “you cannot negotiate with the climate” she also received a huge round of applause. It’s also the issue which wins the strongest support among voters.

People trust them when it comes to the environment. Romson knew that but she also knew that the party had to broaden its electoral appeal. However, she did not succeed in doing so with her Almedalen debut.

For example, when mentioning “foreign policy” she said the Greens wanted the massacres in Syria to stop. That was it. She did not suggest any form of solution.

And when she criticized the current centre-right Alliance government she sounded much like a ranting left-wing politician.

It was easy to forget that, only a week ago, the Green Party had made a deal with the government that would grant illegal immigrants access to Sweden’s public healthcare system.

But the main message of the speech was that the government was doing things the wrong way. It was a speech for the already converted.

Romson failed to understand that the Green Party has to speak to the electorate, and not to those who wave huge “no to nuclear power” banners as some in the audience did.

She was later interviewed on TV and had difficulty defending why those who live in the Swedish countryside should pay high taxes on petrol.

If anything, this is a sign that the Green Party is becoming a very urban party – something she could have explained in the speech.

On a final note, although many journalists and members of the chattering classes vote Green, some of them looked rather bored during the speech. One of them was Gunnar Wetterberg who is head of research for one of Sweden’s largest white-collar trade unions, SACO.

In the audience there was also a fair amount of what some Americans might call liberal elite arrogance. When Romson said that “we need to understand the climate” a girl representing a student union at Uppsala University quipped: “Duh, we’re the ones here, we get it”.