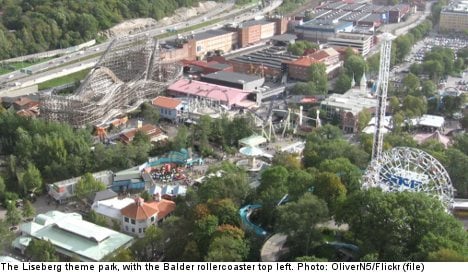 Stina Andersson, a 28-year-old from Stockholm, was on a trip with friends to Liseberg, an amusement park in Gothenburg.

However, after waiting 30 minutes in line to ride one of the park’s main attractions, the “Balder”, staff members refused her entry onto the ride, telling her that her waist line did not fit within the restrictions for the theme park’s safety routines.

Later, the 28-year-old was also left sidelined as her friends enjoyed the carousel, with staff also telling her she was too big for the ride.

“I felt offended, and people stared,” she told the Aftonbladet newspaper.

Andersson, who paid 375 kronor ($54) for the day, was unimpressed when her request for a refund was turned down.

“You pay a lot of money to be there for a whole day. I paid to go in and ride and that didn’t happen,” she told the paper.

Agneta Caspersen, information officer at the theme park, explained that each ride has its own safety restrictions and that weight has little to do with it.

“Each attraction has a safety belt, or a strap that must be able to be closed. It depends a little on how the kilogrammes are divided,” she told the paper, adding that that it’s impossible to set a weight limit.

Bo Larsson, head of the park, explains that a weight restriction is a precarious undertaking.

“It’s sensitive and can be misinterpreted. What one possibly can inform is that certain rides have a waist circumference,” he told the paper.

Andersson has since received an apology from the park, as well as a free ticket back with a so called “quick pass” to speed up the waiting process at the rides.

She was also given a toy rabbit.