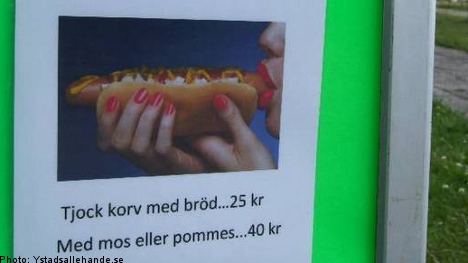 The “offensive” advert, which included a close-up picture of a hotdog, two hands, and two red lips wrapped around the tip of the sausage, was taken down on Wednesday after a member of the local council responded to a complaint by the municipality’s gender expert.

This move prompted Felicia Lundqvist from Uppsala to protest against the local municipality in Simrishamn, which she claims is “wasting” tax money by employing a gender expert.

She stood in a busy square in the town with a sign over her chest which read: “Felicia’s hotdog stand. Suck on that gender experts!”

“People can either get a sausage or pose with me,” she told the Aftonbladet newspaper, adding that she found “nothing to be offensive” about the original advert.

Gender studies expert Britten Dehlin was the expert who had taken issue with the street vendor’s initial picture, causing its removal.

“This is a sexualized picture. A prime example of an poorly-thought through act and a traditional gender approach with the aim of drawing in customers,” she told the local Ystads Allehanda newspaper at the time.

Lundqvist, however, was shocked that politicians could remove an ad for reasons of “gender equality” without even reporting it first to the advertising ombudsman.

“Is it truly right, looking at questions of fairness on such a small scale?” she asked the paper, adding that she had not reacted to the picture personally – only the backlash from gender experts.

“It could just have likely been a man with red lips and red nails in the picture.”

“I’ve read all the article comments and 98 percent of them are negative that this issue has even been brought up, they think it’s ridiculous that tax money has been spent on such questions,” she told the paper.

Furthermore, Lundqvist claims that she can’t understand why gender experts are given such lofty platforms to speak, claiming that Simrishamn’s gender expert’s salary should be donated towards preschools in the area instead.