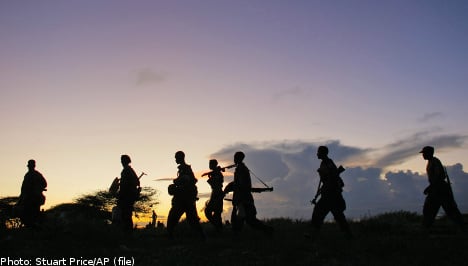 Soldiers of the Somali National Army (SNA) patrol near the town of Afgoye.

The two Kenyan aid workers and a Somali doctor were kidnapped in northern Somalia’s semi-autonomous Puntland region on Wednesday.

“It has now been confirmed that a certain pirate group was involved. The hostages are reported well and have been taken to a known location under the control of pirates,” IAS said in a statement Friday.

“No demands have so far been presented by the group.”

IAS said it was in talks with several groups in Kenya and Somalia but refused to name either the kidnappers or where its employees were being held.

The agency “condemns this serious act of aggression against humanitarian staff in the strongest terms,” it said.

“We urge the attackers to immediately and unconditionally release our staff,” it said.

Somali police said the kidnapping happened near the village of Baadweyn, about 50 kilometres north of Galkayo, at the border between Puntland and the self-proclaimed separate region of Galmudug to the south.

The abductees’ driver and two of their police escorts were wounded in the snatch.

Somalia has been crippled by unrest and has been without an effective government for nearly 20 years, with Islamists, warlords, criminal gangs and pirates controlling portions of the vast east African country.

Last week four foreigners working for the Norwegian Refugee Council were released in southern Somalia following a joint operation by Somali and Kenyan forces three days after their abduction.

In October 2011, gunmen seized two Spaniards working for Medecins sans Frontières in the Dadaab refugee camp. They are still being held hostage in

Also that month, a Dane and an American were kidnapped in Galkayo and held hostage for three months before being freed by US special forces.

In June, two South African sailors abducted in the Indian Ocean in 2010 were freed by Somali special forces after they had apparently passed from pirates to Islamist insurgents.

In July 2009, a French agent for the DGSE foreign intelligence service, identified by the pseudonym Denis Allex, was seized from his Mogadishu hotel by Islamist militants.

He remains in captivity.