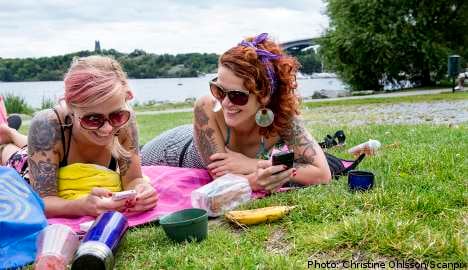 “We will get some really sunny July-weather, “said meteorologist Alexandra Ohlsson of the Swedish Meteorological and Hydrological Institute, SMHI, to daily Dagens Nyheter (DN).

The sunshine will grace central parts of Sweden and the southwest in particular but Ohlsson promised that most of Sweden will see warmer weather over the next few days.

Many parts of Sweden basked in sunshine and experienced a rise in temperature already on Tuesday afternoon, although parts of northern Sweden, namely counties Norrland, Dalarna and Värmland still had to put up with a lot of cloud coverage and even some showers.

“There is a high pressure ridge over southern Sweden giving us more stable weather. The warm air has been moving up through Germany and Poland. In those areas they are having 25-26 degrees at the moment,” Ohlsson told daily Expressen.

The best chances of sunshine and warmth will be on Wednesday across the country.

“The heat is expected to reach its peak then,” Ohlsson told DN.

After Thursday more unsteady weather is expected, albeit moving in over the country slowly, with a front of rain expected in time for the weekend.

“The heat will slowly abate and the weather will turn and become less stable. On Saturday rain will move in from the southwest across the whole of the country,” Ohlsson told Expressen.

But Swedish holiday-makers shouldn’t despair, according to Ohlsson, who told DN that more sunshine is expected for next week, although the temperature will stay closer to 20 degrees Celsius.

“There will be pleasant temperatures that still leave you with energy to do things and not just slump on your sun lounger,” she told the paper.