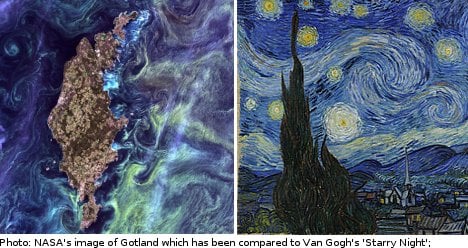 The image of Gotland from the sky in the summer surrounded by massive congregations of greenish phytoplankton swirling in the dark water was likened by NASA to Vincent Van Gogh’s painting “Starry Night”.

The picture was taken by the Landsat 7 satellite on July 13th 2005 and came in first of a top five winners in the “Earth as Art” competition.

The other four winners, chosen from some 120 images selected for public perusal were: Lake Eyre in Australia, Erg Iguidi in the Algerian Sahara, the Mississippi River near Memphis, USA and the Yukon Delta in Alaska, USA.

The Landsat series of Earth observation satellites has been recording images of the planet’s surface for the past forty years. The database is a vital global reference to assist the understanding of scientific issues related to land and water resource use.

The “Earth as Art” project has been created by the US Geological Survey to “demonstrate an artistic resonance in satellite land imagery”.

The public poll received some 14,000 votes on the more than 120 images which can viewed by following the link below.