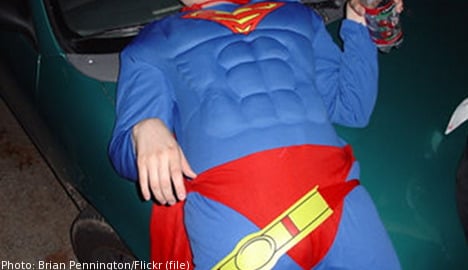 The inebriated superhero in the picture is not the one mentioned in the article.

“He was seen stumbling about in a pretty drunk condition,” police officer Erik Kummu to local paper Norrbottenskuriren.

Locals had observed the man late on Wednesday night as he was staggering around on the Storheden shopping estate in Luleå in a highly intoxicated state.

“It is dark up there and there are all kinds of little slopes and hills, so we had to see if he was in need of help,“ Kummu told the paper.

After receiving the call around midnight, police had managed to locate and identify the man some 30 minutes later. He was deemed as too inebriated to fend for himself and the wannabe superhero was therefore brought in to the local station to sleep it off in the drunk tank.

However, according to police, the world was never robbed of one of its crime fighting geniuses, despite the man being locked up over night.

“It is not the real Superman,” Kummu reassured the paper.

In fact, the man tuned out to be a holidaymaking Norwegian, visiting town in superhero garb.

The man, obviously craving his Kryptonite of choice, was again spotted in central Luleå the night after, sporting his superhero outfit and having had one too many.

“He was allegedly thrown out of a local restaurant,” Kummu confirmed to Norrbottenskuriren.

This time, however, the police only kept an eye on the man and didn’t feel the need to bring him in.