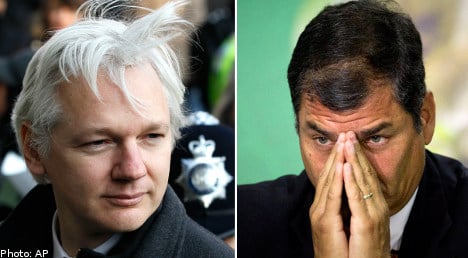 “The problem is that they aren’t going to give him the safe conduct,” Rafael Correa said in a radio interview, adding that “Mr Assange can stay indefinitely in our embassy.”

Ecuador on Thursday granted political asylum to the 41-year-old Australian activist, who has been holed up in the country’s embassy in the British capital since June 19th to escape extradition to Sweden.

Britain said the Ecuadoran decision changed nothing and that it was obliged under its laws to extradite Assange, who is wanted for questioning in Sweden in a sexual assault case.

Correa contended that European law was “a bit different” from Latin American legal practice, which he said requires the country where the embassy is located to “obligatorily grant safe conduct.”

“In Europe it’s not like that, at least not in the United Kingdom,” he said, in his first public comments since his foreign minister announced that Assange would be granted asylum.

In its decision, Ecuador cited the possibility that Assange might be extradited to the United States where he fears he could face the death penalty for WikiLeaks’ release of a massive trove of classified US documents.

Correa repeated an accusation made earlier this week by Foreign Minister Ricardo Patino that Britain had threatened to storm the embassy to seize Assange.

“A couple of days ago we received… the threat, not even a veiled threat but explicit and in writing, that they could come into our embassy under their domestic laws,” he said.

Correa insisted that even though diplomatic premises are inviolable under international treaties, “that possibility exists according to what the United Kingdom itself expressed,” he said.

Britain on Thursday denied that it had threatened to storm the embassy.

British Foreign Secretary William Hague warned, however, that “no one, least of all the government of Ecuador, should be in any doubt that we are determined to carry out our legal obligation to see Mr Assange extradited to Sweden.”

Correa said Ecuador acted only after exhausting all efforts to secure guarantees that, once in Sweden, Assange would not be extradited to the United States.

“Sweden never gave that guarantee, England never gave it,” he said, adding that Assange risked life in prison if extradited to the United States.

The US State Department said the struggle over Assange’s status was a matter between Ecuador, Britain and Sweden, and that the United States had no plans to interject itself in the dispute.

The Organization of American States has meanwhile called a meeting of foreign ministers for August 24th to discuss the standoff sparked by Ecuador giving asylum to Assange.

Twenty-three countries voted for the resolution proposed by Ecuador to convene the meeting at its Washington headquarters to discuss Quito’s standoff with Britain over Assange.

The United States, Canada and Trinidad and Tobago voted no. Five countries abstained, and three others were absent.

The US envoy to the OAS, Carmen Lomellin, said a meeting of OAS foreign ministers “would be unhelpful and harmful to the OAS’ reputation as an institution.”