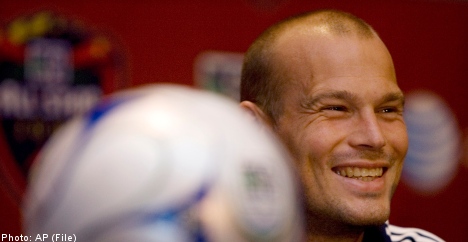 With a professional career spanning two decades, five international tournaments, with a role as captain of the Swedish national team and the top leagues of four countries, Ljungberg is one of Sweden’s most popular footballers.

He quit the country’s national side after Euro 2008, and has now announced his retirement from club football as well. Ljungberg’s last team was the Japanese Shimizu S-Pulse.

“Ten days ago I said to my agents, ‘finito’. They wanted me to think about it for a week, but I’ve had time to reflect and consider this. I love the game, but my motivation isn’t high enough. This decision feels right,” he said to the Aftonbladet newspaper.

He signed with the Japanese team in September 2011, and left by mutual consent six months later, hoping to return to the English Premier League. But tricky paperwork forced him into a six-month hiatus, reported Aftonbladet, and during this unwanted break Ljungberg made his decision to quit.

The midfielder made his professional debut in 1994 in the Swedish league Allsvenskan, with the team Halmstads BK, but hit the big-time when he signed with Premier League’s Arsenal in 1998. Ljungberg mentions this time when asked to list his favourite footballing moments.

“Football has given me unbelievably much, but one thing I can say is the special feeling we had in Arsenal. All of the players were top three in the world in their positions, but everyone was still nice.”

“We were like a family. Whenever we won something and you felt that fellowship… Well, I’ll probably never experience that again,” he said to Aftonbladet.

At 35, Ljungberg will now be starting a new career in London real estate, but hopes to be remembered fondly by fans.

“I hope people will remember that I’ve always tried to be humble, and that I always gave my all for the teams I played for,” said Fredrik Ljungberg.