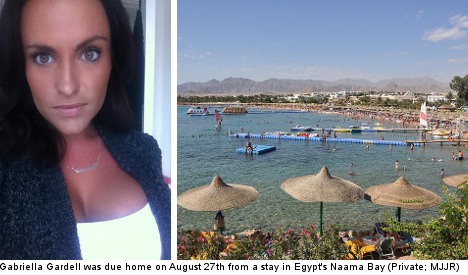 Gabriella Gardell was due to return from her sun, sea and sand holiday in Sharm el Sheikh on Monday August 27th.

But she never boarded the plane home and Swedish police have since issued an international search warrant.

“We are really worried. Gabriella usually gets in touch several times a day,” her sister Alexandra told the Aftonbladet newspaper.

After working all summer as a restaurant manager in Visby on the Baltic island of Gotland, Gabriella decided to treat herself to a relaxing holiday in Egypt.

On Saturday, she sent a text message to her family from the luxury hotel Tropitel Naama Bay in Sharm el Sheikh, where she was staying.

“Am lying by the pool and having a really nice time,” she wrote.

That was the last that Gabriella’s family heard from her. Since then, they have been searching for her frantically.

The family first contacted the local police in Gotland to report Gabriella as missing.

The Gotland police, in turn, sent the details to the National Bureau of Investigation (Rikskriminalpolisen) in order to put out an international search warrant.

David Smitterberg at the Gotland police department said it is too early to say what could have happened to Gabriella.

“We are focusing on getting more information and are trying to rule out potential crimes, but it is way too early to make a statement either way,” said Smitterberg.

The family has been in contact with the Swedish embassy in Egypt as well as the hotel, which reported that Gardell is no longer staying there.

They have also sought help from the organization Missing People Sweden, which has listed Gardell on their Facebook page in hopes that a member of the public may have information about her whereabouts.

“We just want her home. I just want to hear that she is OK,” Alexandra Gardell told Aftonbladet.

Anyone with an information about Gabriella is encouraged to contact the Swedish police at 114 14.