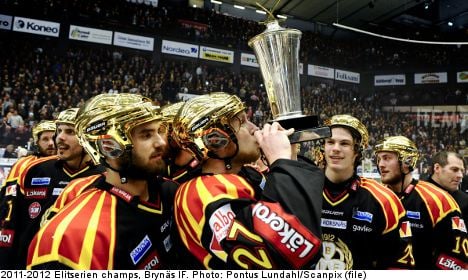 Hockey fans in Sweden have been salivating all summer for the start of the new Elitserien season.

CLICK HERE FOR THE TOP FIVE FUN FACTS ABOUT THE ELITSERIEN

Also in contention is another team from the north, Luleå, which topped the league tables last year at the end of the regular season and finished with the best record after pre-season play, which wrapped up a few days ago.

The impending NHL lockout could also have repercussions for the Elitserien should the league be forced to lift its current ban on short-term contracts for Swedish NHL players who may find themselves looking for a place to play.

Of course, a lot can happen once the Elitserien’s twelve teams square off against one another on Thursday to kick off the 2012-2013 season.

But whether you are a diehard puck fan or just an unsuspecting expat from warmer climes who is trying to fend off a bout with Swedish hockey fever, The Local is here to offer up a few fun facts that can help you sound like an Elitserien expert.

For example, which film director introduced hockey to Sweden?

Or, how does Sweden’s Elitserien rank when it comes to being a “balanced” league? What is a balanced league, anyway?

So, lace up your skates and grab your stick cuz the Zamboni has left the ice. It’s time to aim for the five hole as you try to put the biscuit in the basket with The Local’s top five random facts about Sweden’s Elitserien.