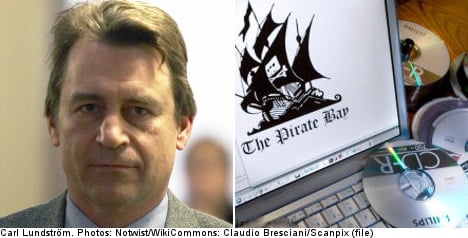 The bankruptcy filing will make it harder for music and film companies involved in the lawsuit against The Pirate Bay to receive any of the 46 million kronor ($7 million) in damages they were awarded in the case, the Ny Teknik magazine reports.

Lundström, along with Gottfrid Svartholm Warg, Peter Sunde and Fredrik Neij, was convicted in April 2009 on charges of being an accessory to copyright violations for his role in bankrolling the filesharing site.

The four were initially sentenced to a year’s imprisonment apiece and a combined fine of 30 million kronor.

All four appealed their sentences, with the Svea Court of Appeal ruling in November 2010 to uphold the convictions, with the exception of Svartholm Warg who was absent due to illness.

The appeals court however reduced Lundström’s sentence to four months, but increased the damages to a total of 46 million kronor.

Since then, however, the unpaid damages claim has grown to 76 million kronor due to accumulated interest fees.

At the time of the trial, Lundström was the oldest of the four Pirate Bay defendants and the most public.

He had made a fortune estimated at 77 million kronor in the early 1980s when the Wasabröd family business was sold. He then owned the telecom company Rix Port80, which was subsequently sold to Phonera for 35 million kronor.

Lundström has lived in Switzerland since 2008 and over the summer submitted the personal bankruptcy filing to a court in Uznach, according to Ny Teknik.

He was the target of a previous tax avoidance probe in which he was accused of hiding 20 million kronor in a foundation in Lichtenstein and two years ago was ordered by the Swedish Tax Agency (Skatteverket) to pay nearly 1.7 million kronor in back taxes.

While Lundström confirmed for Ny Teknik that he has filed for personal bankruptcy, he refused to comment on the reasons behind the filing.

He is believed to be in Thailand or Laos.

Peter Sunde, the former Pirate Bay spokesperson, is facing a probe into whether he has a hidden interest in Flattr AB, an IT company he started in 2008 and is valued at 88 million kronor.

Meanwhile, Gottfrid Svartholm Warg, is facing damages claims of 54 million kronor from the Pirate Bay verdict. However, he is now being held on remand after being deported from Cambodia on suspicions that he hacked into the tax agency and IT firm Logica.