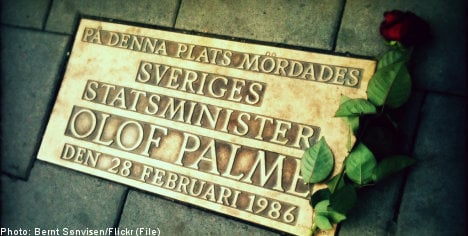 “On the night of the murder, he actually tried to call, but it didn’t work. He couldn’t get ahold of anyone,” Joakim Palme told talk show host Fredrik Skavlan in an episode to be broadcast on Sveriges Television (SVT) on Friday night.

However, information about the alleged call wasn’t included in the investigation, according to Ingemar Krusell, a lead investigator on the case.

“Lisbeth Palme confirmed during interviews that her husband didn’t want to have bodyguards that night,” he told the Expressen newspaper.

“That was information she provided very early in the murder investigation,” he told Expressen.

“But the reason that he didn’t get in touch with them? That I don’t know…maybe he had the wrong number; there was something that just made a clicking sound.”

On the afternoon of February 28th, 1986, Olof Palme and his wife had been driven home by Säpo guards, at which point Palme told the security detail they could go home for the weekend.

But a few hours later the couple decided they wanted to go see a movie.

“They had spoken about maybe going to see ‘My Life as a Dog’. Then dad called around six or seven and heard that my girlfriend and I would go see ‘The Mozart Brothers’. Then he said they might want to see that instead,” said Mårten Palme, another of Palme’s sons.

Following the film, the Prime Minister and his wife were walking down Sveavägen in central Stockholm when a gunman approached them and shot Olof Palme dead.

The assassination remains unsolved and continues to haunt Swedes more than 25 years later.

According to Mårten, the system in place for protecting his father was less than satisfactory.

“It was pretty poorly organized. The bodyguards were okay, but it was a complicated system,” he said.

All three of Palme’s sons appear together in an interview with Skavlan set to be broadcast Friday night at 9pm local time on SVT.