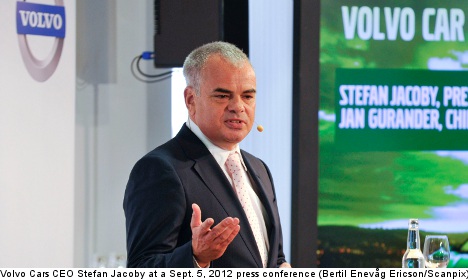 According to Jacoby, 54, the stroke was “mild” but has nevertheless impaired his ability to move his right arm and leg.

“I was lucky that it was a mild stroke,” Jacoby said in a statement released on Sunday.

“Now I will focus on resting and exercising, in order to get back to work as soon as possible.

According to Volvo Cars’ spokesperson Per-Åke Fröberg, Jacoby suffered the stroke about a week ago.

“The doctors expect him to be back on the job in about a month,” Fröberg told the TT news agency.

He emphasized that Jacoby hasn’t suffered any additional symptoms stemming from the stroke.

“It’s limited to his ability to move, which we believe he’ll be able to recover fairly quickly through exercise,” Fröberg said.

The stroke means Jacoby will miss the upcoming auto show in Paris, which opens for the public on Satuday.

During the time that Jacoby recuperates, Volvo’s CFO Jan Gurander will act as CEO. Jacoby stressed as well that he will remain in “ongoing contact” with the automaker’s board and executive management team.

Jacoby, a German national, assumed the role of CEO in August 2010 when Volvo Cars was purchased by Chinese automaker Geely in August 2010 after having served as head of Volkswagen’s US operations.