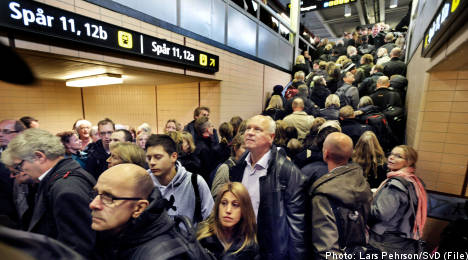 “We are experiencing several major faults, partly due to the auxiliary power for the signalling system having been wiped out and partly due to a fire in the switching box between Upplands Väsby and Märsta,” said Roger Falk at the agency to news agency TT.

At present all the Arlanda Express trains, which normally shuttle passengers between Stockholm’s main airport and the central train station, have been cancelled, with passengers being advised to take the airport bus service or taxis.

The outage is having an impact on all northbound traffic bound for Gävle, Hudiksvall and Sundsvall on the north eastern coast.

Trains that were bound for Dalarna and the Stockholm-Avesta-Krylbo-Mora line are being redirected via Västerås and will be departing according to schedule, although passengers are advised to expect some delays.

Falk told daily Dagens Nyheter (DN) that between Stockholm and Uppsala, situated some 60 kilometres from the capital and home to many who work in the city, there is currently only one northbound line open and commuters can expect major delays.

The outage is also affecting commuters within the greater Stockholm area as commuter train traffic north of town is down as well.

According to a preliminary prognosis from the Transport Administration, rail traffic is predicted to be up and running again until 6pm.

“We’re hoping to have traffic moving again soon, but if the outage continues we are hoping to be able to bring in more buses,” SL spokesperson Magnus Andersson told TT.