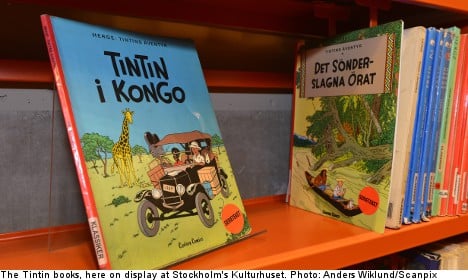 Hot on the heels of the controversy created by Kulturhuset youth library’s removal of “Afro-phobic” Tintin comics from their shelves — and the subsequent reversal — a survey has revealed that the ban on Tintin extends further than just the one Stockholm library.

Ten percent of libraries around the country included in the survey have chosen to remove the books from their shelves, or at least restrict availability, according to a survey by the Aftonbladet newspaper.

“We’ve removed ‘Tintin in Congo’ from our catalogue, above all due to the racist pictures. However, the book can be loaned in different adult contexts, to teachers for example,” explained a spokesperson of a library in Askersund, central Sweden, to the paper.

Other libraries have not been so liberal, such as the Arboga library in central Sweden, which simply does not stock Tintin due to the books’ “racist content”.

However in Åmal, western Sweden, library staff has pushed for debate rather than censorship.

“We think that people should look on the books as a document of the time and instead learn something about the historical development. It’s really the same ‘problem’ with Pippi,” said staff member Annika Andersson to the paper, referring to critics who have also pointed to racist themes present in the popular children’s books by Swedish author Astrid Lindgren.

“To clean out or to censor seems incredibly undemocratic and ugly.”

The short-lived ban at Stockholm’s Kulturhuset last week prompted a storm in the Swedish media and beyond, resulting in the books being put back on the shelves just hours after the ban was announced.

Tintin was created by Belgian artist Georges Remi and revolves around Tintin, a young investigative journalist who travels the world solving mysteries.

The comics, published between 1930 and 1976, have been translated into over 50 languages and sold over 200 million copies. Steven Spielberg directed a motion capture 3D film version in 2011, The Adventures of Tintin: The Secret of the Unicorn.