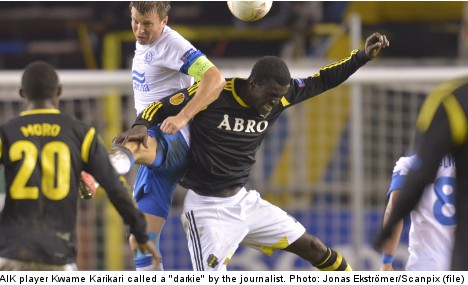 The reporter, 78-year-old Bo Hansson, did not regret his choice of words either, but was remorseful to learn that it made it to on to the Radiosporten broadcast.

“I’m so old so I have a different background with these kinds of words. Blackie is not disparaging for me. I can say ‘yellow’ about a Chinese person, I could bloody well say ‘whitey’ too. For me, it’s mostly just a description,” he told the Aftonbladet newspaper.

Furthermore, the commentator explained that he wasn’t aware that he was being recorded, as he was merely sitting next to another commentator and was picked up by the microphone.

“I was speaking to myself in my corner. It wasn’t meant to go out. I had no idea that it was being transmitted.”

When asked if he understood why there was a public backlash, Hansson responded affirmatively.

“Yes, nowadays, it’s clearly very serious. For me it’s not really the same. And it definitely shouldn’t have gone out. I was just sitting and speaking for myself.”

According to the Aftonbladet newspaper, the remark came in the 77th minute of the AIK verse Gefle match when Kwame Karikari was substituted for Viktor Lundberg, prompting Hansson to say: “Not another darkie!”

The word was used at least another two times.

“There are so many players that are too similar – too many. These are black players who are brought up in the same way and who play in exactly the same style. But adding one more made it even more jumbled. And they lost the match too.”

While Hansson refused to apologize to anyone who may have been offended by the comments, he said that he didn’t mean any harm and maintained that he didn’t realize he was being overheard.