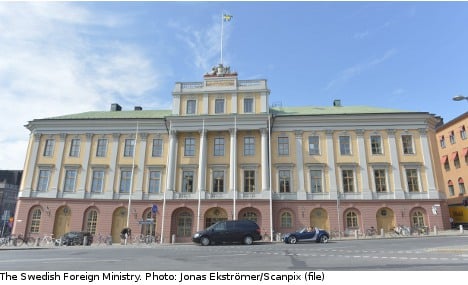 Israeli daily Haaretz said Sweden would try to prevent the European Union from imposing further sanctions against Tehran to protect a deal between telecom group Ericsson and mobile operator Irancell.

“The Swedes fear that other countries with problematic human rights records such as China will hear about the cancellation and worry about their ties with Ericsson,” the newspaper quoted an unnamed foreign ministry official as saying.

A spokeswoman for Sweden’s foreign ministry said the Israeli ambassador was due to meet with Swedish officials early Monday afternoon.

“(The meeting) is about the statements in the Israeli press, that are supposed to have come from the Israeli foreign ministry,” she told AFP.

Swedish Foreign Minister Carl Bildt branded the report “mudslinging” in an interview with news agency TT at Monday’s meeting of the EU’s foreign ministers in Luxembourg.

“This is not how I think mature nations should interact with each other and I will react quite sharply against Israel,” he said.

Israel’s ambassador to Stockholm voiced regret on Monday at an Israeli official’s remark that Sweden would oppose stronger EU sanctions against Iran to protect a business deal, the Swedish government said following the meeting.

Ambassador Isaac Bachman “regrets what appeared” in the Israeli press, foreign ministry spokesman Anders Jörle told AFP after the envoy was summoned over the comments.

“Otherwise you could say the meeting was constructive,” Jörle said, adding that the envoy had insisted the comments in Israel’s Haaretz newspaper did not reflect Israel’s “official position”.

The EU foreign ministers on Monday agreed a slew of tough new financial and trade sanctions against Iran aimed at forcing a breakthrough in stalled talks on Tehran’s contested nuclear programme.

The Israeli embassy in Sweden declined comment when contacted by AFP.