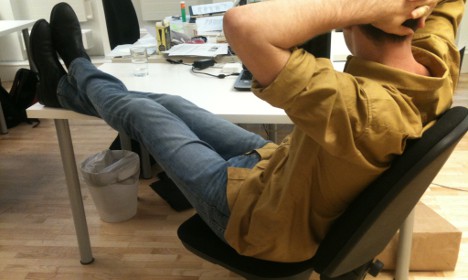 “It is important that more people understand the importance of getting up from a sedentary job or the TV couch. Just to get up and stretch your legs,” said Johan Faskunger of the institute in a statement.

The survey showed that almost three in ten adult Swedes, some 29 percent, stay seated for a period of two hours or more at least once a day.

The sedentary lifestyle seems to be mostly widespread among young Swedish women of which four in ten spend a whole day or more in front of a computer or TV screen or behind the wheel of a car. The corresponding figure among the young males was 36 percent.

A report published by the institute, called Sitting still and ill health (Stillasittande och ohälsa), shows that those with such a lifestyle are at risk of premature death as well as heart disease, even if they take regular physical activity.

“It seems like the sitting down in itself is a risk factor,“ Faskunger said.

Pia Lindeskog, head of the department of lifestyle and living environment at the National Institute for Public Health, called for a more comprehensive study into the link between sitting down for long periods of time and ill health as well as a scientific gradation of methods to counteract a sedentary lifestyle.

1,000 Swedes from age 15 and up took part in the survey, which was carried out by research company Sifo. Participants were asked how common it is that they sit down for periods of two hours or more during a normal day.

The survey and the report were presented on Tuesday as part of a campaign called A Healthier Sweden (Ett friskare Sverige) and running between the 15th and 21st of October, acknowledging the importance of eating habits and physical activity.