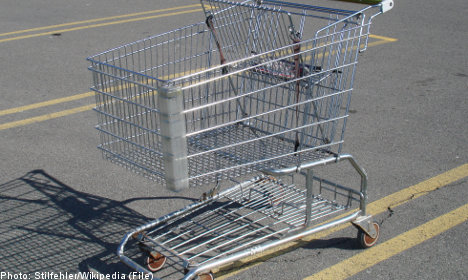 The prosecutor demanded a prison sentence for the woman, calling the incident “serious and ugly”.

The 16-year-old girl was shopping with her mother at the discount department store Gekås, near Ullared in southern Sweden, on a very busy day in October last year.

The teen’s mother, reportedly in her forties, accidentally bumped her cart into the back of an old woman, who was shopping at the store accompanied by her middle-aged daughter.

The old lady became very agitated and started yelling at the pair. As they were leaving, the teenager suddenly felt as if she was kicked in the back and suspected the old woman. The next thing she knew, she was slammed in her back by a shopping trolley.

“The older lady’s daughter took a run with the shopping trolley to get more force into it and with her face contorted, she ran it straight into the back of the young girl,” said a witness to the police, daily Expressen reported in May.

The woman denied having rammed the teen with her trolley and that any dispute had even taken place.

She said during the trial that her mother had been bumped by a different trolley prior to the alleged incident with the teenager. At that point she had said something like “It is possible to say sorry, you know!” or something similar. After that nothing else happened, according to the woman.

However, the Varberg District Court found in favour of the teenager, believing her story, supported by two witnesses who testified that the incident had not looked like it was an accident.

The woman was convicted of assault and was given a probationary sentence and a fine equivalent of 100 days’ pay. Generally an assault verdict warrants a prison sentence but the court found that it could not be proven that the attack had been unprovoked as the 40-year-old and her elderly mother could have been involved in an “incident” prior to the incident.

A prison sentence will therefore not be necessary, according to the court, giving the woman a probationary sentence and a severe enough fine for her to understand the consequence of her actions.