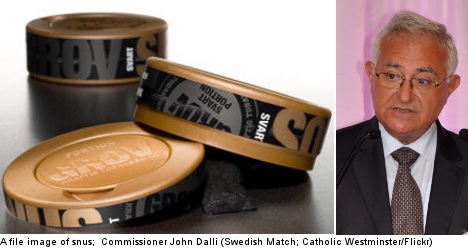 “Commissioner John Dalli has today announced his resignation as a member of the Commission, with immediate effect,” the European Commission announced in a statement released on Tuesday.

Dalli’s resignation, the first for a member of the Commission since 1999, came following the release on Monday of report detailing the findings of an investigation carried out by the EU’s anti-fraud office, OLAF, into a complaint filed by Swedish tobacco company Swedish Match in May 2012.

The complaint alleged that a Maltese entrepreneur sought to leverage his connections with Dalli, also of Malta, in order to “gain financial advantages” from Swedish Match in exchange for attempting to influence “a possible future legislative proposal on tobacco products, in particular on the EU export ban on snus”.

Snus – also known as Swedish snuff – is a tobacco product invented in Sweden in the early 1800s which has gained in popularity in Sweden after smoking was banned in restaurants in 2005.

The sale of snus is outlawed in the European Union, but due to exemptions, it is still manufactured and consumed primarily in Norway and Sweden.

The European Commission’s Directorate-General for Health and Consumers Protection recently unveiled a proposal that would ban all smoke-free tobacco products outside of Sweden.

“It turns out the snus ban was for sale,” Swedish Match spokesperson Patrik Hildingsson told the Aftonbladet newspaper following the news of Dalli’s resignation.

According to Hildingsson, the Maltese businessman came to a meeting and said that “we can solve this for a sum of money”.

“It’s remarkable; it’s not in our DNA or our culture to accept something like this,” said Hildingsson, refusing to elaborate on exactly how much money was mentioned in the offer.

OLAF found that “no transaction was concluded” between Swedish Match and the Maltese entrepreneur and “no payment was made”.

“The OLAF report did not find any conclusive evidence of the direct participation of Mr. Dalli but did consider that he was aware of these events,” the Commission statement said.

The investigation also found that the Commission’s decision-making process “had not been affected” by the matter, but Dalli nevertheless chose to resign “in order to be able to defend his reputation and that of the Commission”.

“Mr. Dalli categorically rejects these findings,” the Commission said, adding that the OLAF report will be forwarded to the Attorney General of Malta who must determine if and how to pursue the matter.

Swedish MEP Christoffer Fjelllner of the Moderate Party who has long advocated for a lifting of the EU’s snus ban said Dalli’s resignation was “very serious and frightening”.

“I get disappointed when I realize that my facts and arguments have likely been in vain,” he said in a statement.

“Corruption at the top of the EU system undermines not only confidence in EU legislation, but also in the EU as an institution.”