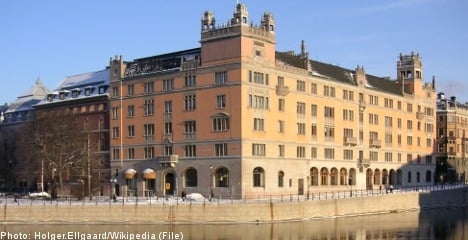 “It’s a man who hates politicians. He has threatened several ministers,” an undisclosed source at the offices revealed to newspaper Metro.

Security has since a few months back been heightened at the government offices, without officials wanting to explain why.

Previously it had been possible to access reception areas of the different ministries, but since the new rules came into effect the doors remained locked.

According to daily Aftonbladet, the strict rules have been lifted a little since, with staff being able to pass through some reception areas without having to show their ID. However, access to Prime Minister Reinfeldt’s office will still only be allowed through identity checks.

The ministers who have received threats from the man are not aware of being threatened, according to the Metro report.

Rosenbad security received a tip from the man’s doctor and are said to know his name and what he looks like. They are treating the threats very seriously.

At the government offices they were still not willing to confirm the reason for the heightened security but Metro’s source said that these things happen from time to time:

“These threats come and go. It is annoying to have to show your pass all the time but we’d rather have that than an attack on the government offices like happened in Norway,” the official told Metro.

In August, a confused Brazilian knifeman attacked a bodyguard of Fredrik Reinfeldt close by the government offices but was overpowered by some passers-by, stating in the interrogations that he had “wanted to kill the King”.